Ireland is A+, says new ratings agency on the block 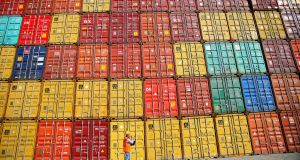 If we continue to apply ourselves, our grades should hold up, if not improve. Photograph: iStock

A new ratings agency joined the Irish club on Friday, as New York-based Kroll issued its inaugural sovereign rating on the Republic, complete with a fine tricolour on the front page. The news was good, with Kroll awarding an A+ rating, which is a few steps away from its top AAA level, but suggests what teachers might describe as “great potential” in a school report for a reliable pupil.

On the positive side, Kroll cites the State’s “open, competitive and wealthy economy”, which it says enjoys “elevated income levels and strong growth”. It also highlights the State’s appeal for foreign investors, its “active debt management” and – especially fine music to the Government’s ears – “strong post-crisis economic management”. So far, so comforting.

The other side of the ratings picture – “credit concerns” – features another list of factors we are familiar with but that provide less of a warm glow. There is the “highly open” status of our economy, which leaves us vulnerable to shocks – Brexit, trade protectionism and international tax reform are included here. Our debt burden is also mentioned, as is the proportion of our corporate tax take that comes from multinationals and is thus potentially unreliable.

Crucially, Kroll’s ratings are based on an assumption that Brexit “will prove manageable for Ireland”. It says we face “a period of near-term uncertainty” but the economy’s strengthened resilience should allow us the ability to withstand this.

The agency also expects that US and other tax reforms “will not materially impact the Irish economy”. The caveat is that “if either of these assumptions prove incorrect”, the rating would likely to be revisited. As if we didn’t know, Kroll.

The outlook for Kroll’s A+ is stable, which will also be welcome news for the Government. The agency says it expects more strong economic growth, “enhanced economic resiliency” and a further decline in our debt burden, coupled with “the ongoing rehabilitation of the banking sector”. It also points to competitiveness, ease of EU market access, a stable regulatory and tax environment and an educated workforce as being important in underpinning FDI.

In other words, if we continue to apply ourselves, our grades should hold up, if not improve.