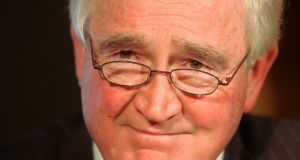 Eddie O’Connor, Mainstream chairman, owned 42 per cent of the firm before it spent €153.3 million in late 2018 repurchasing and cancelling stock acquired by Barclays. Photograph: Frank Miller

Green energy entrepreneur Eddie O’Connor’s stake in Mainstream Renewable Power has increased to 55 per cent, after the emerging-markets-focused wind and solar energy group moved late last year to buy back shares held by two major legacy investors in the business.

Mr O’Connor, now chairman, owned 42 per cent of the company before it spent €153.3 million in late 2018 repurchasing and cancelling stock that was acquired by UK banking giant Barclays months after Mainstream was set up in 2008 and issued to Japanese trading house Marubeni in 2013.

The move came ahead of Mainstream – which was originally set up with money put in by Mr O’Connor, other managers and high-net-worth individuals – opening up a temporary grey market before Christmas to give long-standing investors their first chance to trade stock.

Mainstream had set a €9-per-share price target for investors who availed of the opportunity to sell before a deadline of December 21st, representing a 300 per cent return on money originally put into the company in 2008. It is understood that 10 per cent of the company changed hands during the grey market window and that Mainstream aims to repeat the exercise within the next 12-18 months.

The share price that was set was €1 above the rate that Mainstream paid Barclays and Marubeni to redeem their stock – but a discount to an €11.70 external, independent valuation that had been placed on the stock last year. That valued the equity in the group at about €700 million.

Mainstream received a transformational boost last year when it sold a Scottish offshore wind farm development for up to €650 million, which helped the company deliver a €556.9 million gross profit for the first half of 2018.

This allowed Mainstream to pay off all its debts and left it with €593 million of cash –before buying out Barclays and Marubeni and spending a further €24.2 million to buy back warrants Australian bank Macquarie held in the group.

Mainstream began to search last September for a potential equity partner to help build and run 1,300 megawatts of wind and solar projects that will cost $1.65 billion to develop in Chile. The size of the projects equates to more than a quarter of Ireland’s peak electricity needs. It has further portfolios of almost 8,000 megawatts of pipeline developments across Latin America, Africa and Asia.

Group chief executive Andy Kinsella told The Irish Times last September that the company would more likely be sold on from as soon as 2020 rather than go through an initial public offering (IPO).