Kenmare cuts debt on back of record shipments of products 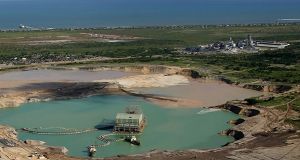 Irish titanium and zircon miner Kenmare Resources reported a record shipment of its products in the second quarter.

Kenmare said net debt fell to $9.1 million in June, as against $34.1 million at the end of last year.

Gross bank loans amounted to $93.3 million at the end of June, while cash and cash equivalents were $84.2 million.

During the second quarter, Kenmare said it mined 8.4 million tonnes of ore at an average grade of 4.68 per cent, producing 377,900 tonnes of heavy mineral concentrate (HMC).

The company said it was seeing some season weakness in the Chinese ilmenite market, which coupled with disruption to pigment plant operating rates is leading to a slowdown in ilmenite purchasing activity.

“The zircon market continues to benefit from steady demand and constrained supply, driving higher prices. Further price increases were achieved in the second quarter and are being implemented in the third quarter in line with the prevailing movement in the market,” Kenmare said.

1 Admission of mistake in Oxford vaccine dose raises doubts over reliability
2 Cliff Taylor: Deal or no deal we are now heading for a hard Brexit
3 Karlin Lillington: How I managed to cut my mobile phone bill by at least half
4 Irish Life fund pays €49m for 94 Dalkey apartments
5 Central Bank rules out changes to mortgage rules during pandemic
6 Fiona Reddan: Who’s afraid of Revolut? Not AIB and BOI it seems
7 Retirement spending falls ‘considerably’ sharper for single people, says ESRI
8 PTSB appoints former Pepper Ireland CEO to board
9 Lahinch Golf Club runs out of its own cash after €3m Covid-19 hit
10 State may face €1bn in compensation in Covid-19 case, Press Up claims
Real news has value SUBSCRIBE