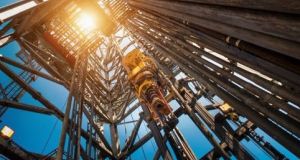 Tullow Oil has upgraded its full-year production estimate to an average of between 86,000 and 92,000 barrels of oil daily, and an overall average, including gas, of between 89,000 and 95,000. Photograph: Reuters

That will deliver revenues in the region of $900 million, the group said.

The company also said it would hire another rig to accelerate exploration of its Jubilee field off Ghana where it has been conducting three test drilling exercises in the first half. The Stena Forth rig is expected to commence drilling in October on a three-month exercise.

Chief executive Paul McDade said the company had performed strongly in 2018 so far. “With substantially reduced gearing and financial discipline embedded across the group, we are now able to focus on the growth of the business.”

Aside from increasing activity across west Africa, he said the company continued to make “good progress towards sanctioning our developments in east Africa”.

“Having refreshed the exploration portfolio, we are about to embark on a multi-year frontier drilling campaign targeting high-impact prospects in Africa and South America. There is much to look forward to for the remainder of the year and beyond.”