Teeling oil company in talks with Gazprom over Crimea venture 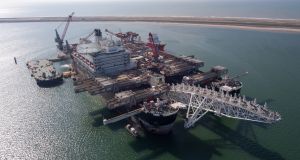 An executive from John Teeling’s Petrel Resources held informal talks with Russian gas monopoly Gazprom about developing an energy project in Crimea, the Ukrainian territory currently subject to international sanctions since annexation by Russia in 2014.

David Horgan, a director at the Irish oil exploration company, spoke in late April with Gazprom at the Yalta International Economic Forum about the possibility of developing a Liquefied Natural Gas (LNG) facility in Crimea or along the Russian Black Sea coast.

Mr Horgan, who was first appointed to run Petrel in 1997, said the mooted project may not be subjected to the onerous Crimea sanctions as the facility could technically be in the Kerch strait – the stretch of water separating Crimea from Russia.

“In any way, we need the gas and 37 per cent of European gas is from Gazprom,” he told The Irish Times.

LNG will represent half of the world’s gas trade in 30 years time and Russia has “infinite gas”, they can pipe from the Azov sea to the Crimean city of Kerch or to the Russian mainland, according to Mr Horgan.

“Crimea is ideally suited to be an energy export hub, either in co-operation with Turkey or via LNG,” he said. “In the Irish Atlantic deep-water offshore, we work closely with our partner Woodside Energy – Australia’s major LNG operator which plays a major role in the Japanese LNG market.”

Mr Horgan outlined his proposal at Yalta but has yet to hear back from Gazprom or the Russian ministry of energy. Gazprom’s press service did not reply to emails seeking comment.

“We did look at it briefly 10 years ago when it was part of Ukraine, but the Ukrainians were so corrupt and there was so much mismanagement,” he said.

“They have infinite gas which they can pipe to Kerch or to Russia proper across the strait. You could flow the tankers through the Bosporus by international treaty and then you can serve the European market and you would be competing with Qatar and some other facilities in North Africa.”

London-listed Petrel Resources is an oil exploration company developing opportunities in Africa, Ireland and Iraq and is part of Irish entrepreneur John Teeling’s 162 Group. Its sister company, Clontarf Energy, is focussed on oil and gas exploration in South America and Africa.

Mr Teeling, who chairs Petrel, said that discussions are still “at an early stage” and hadn’t yet been thrashed out at the boardroom of their offices in Clontarf in Dublin.

In the company’s earnings report, Mr Teeling spoke about the need to change strategy and admitted it is “aware of the need to give hope to investors”. After years of wrangling with the authorities in Ghana, and the nationalisation of the sector in Bolivia, Clontarf said it is now “considering other directions” such as joint ventures.

Mr Horgan paid for his own flight to Crimea via Moscow, but VIP hotel accommodation and meals were taken care of by the organisers.

“They had one nice hotel that president Putin built and we were all in that last year, but this year there were more numbers and we had a hotel half an hour away,” he said.

Kerch was named in September 2014 by Gazprom executives as one of the most probable locations for LNG plant construction at a conference entitled “Integration of Crimea into infrastructure of Russia’s oil product market”.

Gazprom, which is run by close Putin ally Alexey Miller, has not been subjected to sanctions over Crimea or the conflict in eastern Ukraine due to Europe’s reliance on its gas. Miller was added to a US sanctions blacklist in April which may limit his ability to clinch deals and raise financing.

Much of Russia’s gas still transits through Ukraine, and Europe suffered when Gazprom turned the taps off during the “gas wars” in the winters of 2005-06 and 2008-09.

European Union companies and citizens have been banned from buying Crimean companies or property; or supplying, and investing in energy and infrastructure projects there since Russian military forces seized control of the Black Sea peninsula in March 2014

‘Blasted out of it’

Mr Teeling, who hasn’t been to Yalta, said “we got blasted out of it” in a registered letter from the Ukrainian embassy after they were invited to a previous Crimea conference.

Under Ukrainian law, it is illegal to enter Crimea without the permission of the Ukrainian government, even though it no longer controls the territory since the annexation ordered by the Russian president.

Mr Horgan said he may now be banned from going to Ukraine for three years but he has no intention of going there anyway.

“It’s so obvious when you arrive there that Crimea has been totally neglected from the end of the Soviet Union,” he said.

“They did nothing, and the only development is what Putin is doing now. From the point of view and wishes of the people living there, they are far better under Russia.”

Members of an Irish trade delegation to Moscow, including Paddy Duffy, a former senior Fianna Fáil adviser, discussed hotel investments in Crimea during a trip in November.

A former member of the Russian parliament, the Duma, Mr Nazarov chairs property developer GC Granelle, which is currently building 250,000sq m of housing in Simferopol, Yalta and Sevastopol in Crimea.

Mr Duffy told The Irish Times that he had decided not to accept an invitation to travel to Crimea having considered travelling. Mr Martin also turned down an invitation.

The Irish delegations to Crimea and Moscow were both organised by Olga Shajaku, a Russian solicitor based in Dublin for the past 20 years and Delovaya Rossiya’s Irish ambassador. She said only three representatives went to Crimea from Ireland, including Anastasia McCabe, the founder of Russian Bridge, an organisation which promotes Russian culture in Ireland through festivals, student exchanges and musical competitions. Ms McCabe, who has lived in Ireland since 2001, declined to comment.

“Delovaya Rossiya is very powerful and are instrumental in helping to organise the Yalta conference as well as the St Petersburg Economic Forum,” said Ms Shajaku, who couldn’t travel to Crimea due to work commitments. “They are the driving force in terms of international co-operation and arranging deals.”

The prospect of Irish business people investing in Crimea has already drawn the ire of senior politicians in Ukraine who have threatened to prosecute anyone putting money into real estate on the peninsula.

Oleksii Makeiev of Ukraine’s ministry of foreign affairs told The Irish Times in January that his government will use all legal and political instruments to prosecute Irish individuals or companies who try to circumvent sanctions to invest in Crimea.

“We hope that no Irish individuals or companies would travel illegally to Crimea or engage in illicit business activities on the peninsula,” said Mr Makeiev. “By its attempted annexation and illegal occupation of Crimea and invasion of Donbas in the east of my country, Russia committed one of the gravest international crimes since the second World War.”