Galantas says it has struck main gold vein in Tyrone

Development an ‘important milestone’ for company 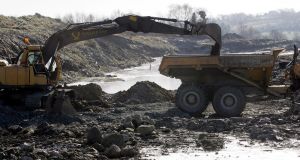 The Galantas Gold Corporation mine in Tyrone.

Galantas Gold, the Canadian company hoping to develop a controversial gold mine in County Tyrone, has said it has reached the main gold vein during underground development at its site in Omagh.

Roland Phelps, president and CEO, Galantas Gold Corporation said that the advancement to the Kearney gold vein was an “important milestone” for the organisation.

Galantas, which recently reported net losses of more than Can$2 million (€1.28 million) for 2017, is currently awaiting the outcome of a planning appeal lodged in opposition to its proposals to develop an underground gold mine at the Cavanacaw mine in Tyrone.

But its arrival at the main Kearney gold vein at the site brings the Canadian company significantly closer to realising its ambitions to bring gold ore to the surface.

Shares in Glantas, which is listed in London and Toronto, rose on Monday when the company confirmed that “its main decline tunnel now descends at “a slope of 1 in 7, from near the base of the former Kearney open pit”.

“A horizontal west to east access tunnel driven from the decline tunnel has intersected the north / south Kearney vein at approximately a right angle and has exposed the vein to be approximately 2.8 metres wide.

“Channel samples are being taken to confirm the grade of mineralisation. An exploration borehole within 20 metres of the vein intersection returned grades of 22.53 g/t gold on a true width of 2.4 metres,” the company said in a statement.