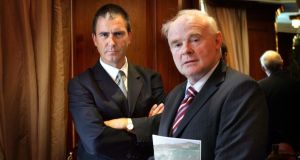 Ukraine has warned Irish oil company Petrel Resources about its plan to develop an energy project with Russian monopoly Gazprom in Crimea, Ukrainian territory currently subject to international sanctions since annexation by the Kremlin in 2014.

Ukraine’s embassy in Ireland warned that Petrel’s proposal to set up a liquefied natural gas (LNG) facility in Crimea with Gazprom may undermine international efforts to contain Russian aggression in Ukraine.

“The united endeavours may be seriously undermined if some actors try to circumvent sanctions and to take advantage of the situation to their own benefit and at the expense of others,” the embassy said in a statement.

David Horgan, a director at Petrel, spoke in late April with Gazprom at the Yalta International Economic Forum about the possibility of developing an LNG facility in Crimea or along the Russian Black Sea coast.

Mr Horgan said the mooted project may not be subjected to the onerous Crimean sanctions as the facility could technically be in the Kerch strait – the stretch of water separating Crimea from Russia.

Kerch was named in September 2014 by Gazprom executives as one of the most probable locations for LNG plant construction at a conference entitled “Integration of Crimea into infrastructure of Russia’s oil product market”.

European Union companies and citizens have been banned from buying Crimean companies or property, or supplying and investing in energy and infrastructure projects there since Russian military forces seized control of the Black Sea peninsula in March 2014.

Gazprom, which is run by Alexey Miller, a close ally of Russia’s president, Vladimir Putin, has not yet been subjected to sanctions over Crimea or the conflict in eastern Ukraine due to Europe’s reliance on its gas.

In its statement, the Ukraine embassy said it believes that “Irish nationals and businesses will refrain from illegally visiting Crimea, as well as from any activities in the peninsula in violation of the concerted efforts of the international community, including the EU”.

Rob Bensh, chief executive of Pelicourt LLC, a private-equity firm focused on the energy sector in Ukraine and eastern Europe, said Petrel should be stopped before its relationship with Gazprom developed.

“No business should be allowed to work in Crimea as long as sanctions are in place. This does nothing but economically reward Russia for their illegal annexation of Crimea,” he said.