Horse manure can ‘contribute’ to reducing reliance on fossil fuels 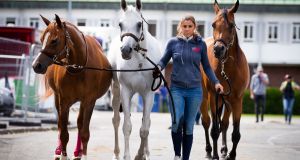 Horse power of a different kind could aid the Republic in cutting dependence on fossil fuels, it was claimed at the weekend.

Helsinki International Horse Show has used contestants’ manure to generate all the electricity that the event has used over the last five years.

Horse Sport Ireland and showjumping’s global body Fédération Equestre Internationale said at the weekend that the system generated more than 150 megawatt hours of electricity for the event.

Electricity not needed was transmitted to Finland’s national grid, which used it to power homes close to the nation’s capital.

Anssi Paalanen, vice-president of the system’s developer, Fortum, argued that it held “immense potential for countries with large horse populations”.

Ireland is Europe’s biggest producer of thoroughbreds and is also home to a large population of sport horses, which compete in show jumping, eventing and other disciplines.

“The manure produced daily by two horses can generate heat for a single family home for a year,” added Mr Paalanen.

Fortum is an international company that specialises in electricity generation, heat and recycling. It began working on the idea to use horse manure as a fuel in 2014 and began the project itself 2015.

Since then, it has collected 70,000 tonnes of the waste from stables around Finland.

It then burns this in a plant in Jarvenpaa outside Helsinki which provides power directly to 1,250 customers as well as supplying the national grid.

The technology was developed partly because Finland has strict regulations on dumping horse manure in landfill sites and on its use as a fertiliser.

Helsinki International Horse Show director Tom Gordin said that as event organisers it is “our responsibility to make sustainable sporting events a real possibility and not just a nice-to-have”.