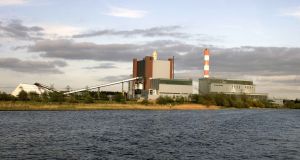 Shannonbridge, Co Offaly. ESB has confirmed it sought aid to dismantle both Lough Ree and West Offaly stations, and did not rule out closing the pair.

ESB is not ruling out closing two peat-burning power plants in a move that could cost hundreds of jobs at fellow State company Bord na Móna.

A paper published by energy industry watchdog the Commission for the Regulation of Utilities (CRU), shows that ESB unsuccessfully sought cash from the State to dismantle Lough Ree and West Offaly peat-fuelled electricity plants after December 31st, when they no longer qualify for a price-support scheme.

Both plants support hundreds of jobs at Bord na Móna, which supplies the peat that they burn to generate electricity. Workers there fear Lough Ree and West Offaly will close as the loss of price supports threatens their viability and Government steps up efforts to cut the Republic’s greenhouse gas emissions.

ESB confirmed yesterday that it sought aid to dismantle Lough Ree and West Offaly, and did not rule out closing the pair. “ESB continues to review future options for both stations,” the company said in a statement.

The State-owned energy group also confirmed it recently agreed a fuel supply deal with Bord na Móna that ensures “both West Offaly Power and and Lough Ree will continue to generate in 2020”.

ESB stressed that when it asked the CRU if it could recover the cost of dismantling the two electricity generators, it was not commenting on either the timing of their dismantling or the cost.

While ESB has never said it intended closing the power plants, it has warned that they will lose money once they no longer qualify for price supports from the consumer-funded public service obligation scheme after December 31st.

It is understood the company would prefer to replace Lough Ree and West Offaly with plants that use renewable fuel to generate power.

ESB is seeking planning permission to allow Lough Ree to burn biomass, that is plants grown for fuel, alongside peat.

An Bord Pleanála refused a similar application for West Offaly earlier this year.

ESB did not challenge the ruling in court, but has said it was considering a new application.

The Bord na Móna group of unions secretary, Siptu official Willie Noone, said news that ESB sought to recover the cost of dismantling the power plants confirmed many of his members’ fears. “Those two power stations are earmarked to close,” he said.

Lough Ree and West Offaly, which is in Shannonbridge, will receive €31 million from the public service obligation scheme over the last three months of this year. ESB sought to recover their dismantling costs from the same scheme on the grounds this was a normal part of the power stations’ “life cycle”.

Consumers and businesses pay for the scheme through an extra charge on their electricity bills.