Dennis Muilenburg says company made errors that it is now fixing 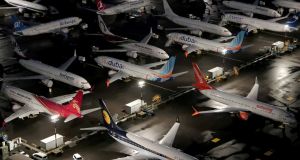 Boeing’s chief executive has apologised to the families of those killed in two separate accidents involving his company’s aircraft, as he testified in front of Congress for the first time since the crashes.

Speaking to the Senate commerce committee on the first of two days of Congressional testimony, Dennis Muilenburg said Boeing made errors which it was now fixing as it tries to get hundreds of grounded Max aircraft back in the air.

Addressing the families of those who died, several of whom attended the hearing, Mr Muilenburg said: “On behalf of myself and the Boeing company, we are sorry – deeply sorry.”

He added: “We know we made mistakes and got some things wrong. We own that, and we are fixing them. We have developed improvements to the 737 Max to ensure that accidents like these never happen again.”

Peter DeFazio, the chairman of the House of Representatives transport committee, revealed on Monday he had originally asked the Boeing chief executive to appear before his committee in June, but Mr Muilenburg had refused. According to Mr DeFazio, Boeing did not want to take part in hearings before the Max was back in the air – a stance it has now abandoned following multiple delays to the re-certification process.

Boeing did not respond to a request to comment.

Mr Muilenburg will speak to the House committee on Wednesday, but speaking to the Senate he said the company had made multiple changes to the anti-stall system which investigations suggest played a role in both accidents.

Earlier this month the company completed a test run of the new system, and Mr Muilenburg said it was still working with regulators to tackle other potential problems.

His testimony is unlikely to dissuade some in Congress from pushing for stricter regulations, with many blaming lax oversight from the Federal Aviation Administration for the problems with the Boeing jet.

Messages handed to the House transport committee earlier this month revealed how Mark Forkner, who was Boeing’s chief test pilot for the Max, appeared to negotiate closely with the FAA about how much training pilots would need to fly the aircraft.

Speaking on Monday, Mr DeFazio said he would propose a new law overhauling the regulatory system, which currently allows officials to delegate responsibility for approving design changes to the aircraft manufacturers themselves.

Mr DeFazio told reporters: “The current system has been in place for 16 years. We went through a time when there were no accidents in the United States of America since Colgan Air [in 2009], and I think some complacency set in on both sides, on the manufacturers’ side and on the regulators’ side.”

He suggested Boeing had put pressure on regulators not to enforce tougher standards on the Max because the company was trying to catch up to its rival manufacturer Airbus.