Reduced passenger charges may be bad news for airport users 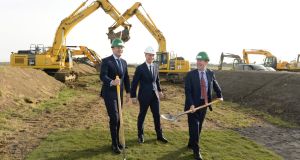 Like many of the aircraft that fly in and out of here every day, the final determination of the Commission for Aviation Regulation last Thursday on passenger charges at Dublin Airport will have gone above the heads of most people.

On paper, it was good news for consumers with the charge set to be reduced by 11 per cent to an average price of €7.87 for the next five years. This should lead to lower air fares from Aer Lingus and Ryanair, although there are some (including State-owned airport operator DAA) who feel the airlines will simply pocket the difference for themselves.

In practice, however, it could be bad news for airport users with DAA, the State-owned entity that owns and manages Dublin Airport, threatening to pull the plug on plans for €2 billion in “much-needed” new infrastructure on the basis that the lower charge means it won’t now be able to secure the debt needed to finance the new boarding gates, aircraft parking stands, upgraded security, and other improvements that are planned.

Anyone who uses Dublin Airport on a regular basis will know that it is bursting at the seams and badly in need of new facilities. According to the DAA, passenger numbers this year will hit 32.9 million, which would be a new high for the airport. Some 3 million people passed through the airport in September alone.

DAA has been banging the drum on passenger charges since CAR announced its initial proposal earlier this year, arguing that the existing charge be retained.

The initial cut proposed by CAR – it suggested an average charge of €7.50 across the five-year period – was deeper than last Thursday’s final figure so the DAA’s lobbying appears not to have fallen on deaf ears.

Before making its final decision, CAR recruited external experts – Centrus Advisors Ltd – to review the financial viability of the new infrastructure at Dublin Airport. Centrus recommended some flexibility in the pricing over the five years, which CAR has built into its decision.

“In our view, the prices set out in this decision enable Dublin Airport to generate timely cash flows from airport charges and raise investment grade debt to maintain and develop the airport infrastructure in an efficient manner,” CAR said last week.

The regulator added that the price cap would allow Dublin Airport collect €1.4 billion from airport charges over the five years, and a further €1.4 billion from commercial revenues, while allowing for up to €2.3 billion in capital investment. “We are fully supportive of all capital projects,” it said.

But the uplift in the charge did little to appease the DAA. “This determination is a disaster for passengers, and for the Irish economy, as we won’t be able to pay for the new and improved facilities that are required at Dublin Airport,” the DAA’s chief executive Dalton Philips said in a hard-hitting reaction to CAR’s decision. “It is meaningless for the regulator to claim that it supports investments in new facilities while at the same time failing to provide the money needed to build them.”

It is highly unusual for a senior public servant to be so critical of another arm of the State, even if it is a regulator.

Philips also complained that the reduction in charges would go to the “shareholders of privately-owned airlines, the majority of which are located overseas”. This was a dig at Aer Lingus, which is owned by the Willie Walsh-led and UK-based IAG.

Aer Lingus recently told The Irish Times that it believed DAA could finance the new infrastructure at Dublin Airport with a lower passenger charge, given the current low interest rate environment globally.

DAA has yet to decide if it will appeal the regulator’s decision, although given the strength of the language used both last week and previously you would wonder why it is hesitating.

DAA is owned by the State and, as an island nation, Dublin Airport is a key piece of economic infrastructure, facilitating a huge amount of our trade and tourism. The board of DAA and its chief executive has a responsibility to put every cent it earns to good use and to protect its financial interests to the hilt, but Philips has backed himself into a corner by threatening to pull the plug on new infrastructure and could yet find him on a collision course with the Government. Dublin Airport simply has to be upgraded.

Mercifully, CAR’s decision to lower passenger charges over the next five years didn’t affect the opening of a “landmark new beauty hall” in Terminal 2 at Dublin Airport, which was trumpeted by DAA within 24 hours of the regulator’s pricing decision.

The beauty hall has doubled in size apparently, giving passengers an even “greater reason to check-in early for their flights”. It follows an overhaul of other retail facilities within T2, including a new confectionary department, and a new “flagship liquor store”.

Investment in shopping has been prioritised over new security facilities and more boarding gates and aircraft stands. We’ll all need to check-in early at the rate things are going.