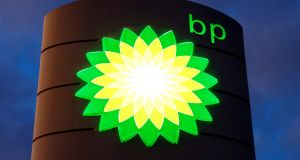 BP, like other big energy companies, has been hit by a sharp drop in oil prices as trade tensions between the United States and China have impacted global oil demand.

The British oil company made its first net loss in more than three years in the quarter due to the one-off charge, but chief executive Bob Dudley, who will step down next year after a decade at the helm, said underlying earnings and cash flow were strong.

Cash flow from operations was unchanged in the quarter from a year earlier at $6.1 billion despite a 17 per cent drop in oil prices.

The $2.6 billion charge resulted in a $700 million net loss but this will not come as a surprise to investors. BP flagged earlier this month it would take a non-cash charge of $2 billion to $3 billion in the quarter as it gets closer to disposing of assets worth $10 billion by the end of 2019, a year ahead of schedule.

So far this year, BP’s proceeds from divestments reached $1.4 billion.

BP last year acquired BHP’s US shale assets for $10.25 billion that turned BP into one of the largest shale oil drillers. It also announced the sale of its Alaskan business to Hilcorp Energy Co for $5.6 billion.

Third-quarter underlying replacement cost profit, the company’s definition of net income, fell 40 per cent from the year earlier period to $2.3 billion. That exceeded a forecast of $1.73 billion in a company-provided survey of analysts and compared to $2.81 billion in the second quarter of 2019.

In a sign of confidence, BP eliminated a scrip dividend for the quarter which allows investors to get shares instead of cash, a measure used during the industry downturn.

Oil and gas production, excluding BP’s share from its 19.75 per cent stake in Russia’s Rosneft, was down 2.5 per cent from a year earlier at 2.568 million barrels of oil equivalent per day as a result of maintenance at several high-margin fields and a two-week disruption to production in the US Gulf of Mexico from Hurricane Barry.

BP said production in the fourth quarter would be higher than in the previous quarter as maintenance winds down.

The weakness in oil and gas production was offset by a strong performance in BP’s refining and chemicals businesses and higher than expected earnings from Rosneft, which helped lower BP’s tax rate.

Dudley will be succeeded by head of upstream Bernard Looney, 49, who oversaw deep cost cuts at the company and the BHP deal. – Reuters