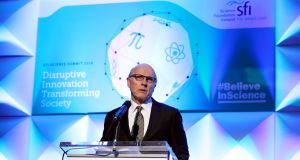 Granahan McCourt, the Government’s preferred bidder for the €3 billion National Broadband Plan (NBP), has been confirmed as one of the lead bidders for Northern Ireland’s state-backed broadband scheme.

The US investment firm, founded by tech billionaire David McCourt, is known to have been shortlisted for Project Stratum, the North’s £165 million broadband rollout project, after the initial stage of procurement.

The scheme, funded from the DUP’s confidence and supply agreement with the UK Conservative Party, aims to equip up to 100,000 rural homes and premises with high-speed broadband.

Similar to the NBP here, it will involve some form of state subsidy matched by private sector investment.

BT’s infrastructural arm Openreach and Fibrus, the broadband company set up by former Enet chief executive Conal Henry, are also known to be in the running.

A spokesman for Granahan McCourt declined to give details of the company’s involvement during what he said was “a live procurement process”.

A spokeswoman for the North’s Department of the Economy, which is overseeing the procurement process, also declined to confirm Granahan McCourt’s involvement.

“The contracting authority is not in a position to provide a list of the shortlisted companies at this stage as we are currently mid-procurement and still in a tender process for Project Stratum,” she said.

“All information is commercially sensitive until the procurement process is complete and the contract is awarded to a successful contractor – the award is anticipated in spring 2020,” she said.

Granahan McCourt was named as preferred bidder for the NBP here earlier this year after rival telcos Eir and Siro dropped out, citing problems with the tender.

The Government’s project, which has been beset with delays and controversies from the start, is now expected to cost close to €3 billion, six times the original estimate.

The Department of Communications, which is overseeing the tender here, is expected to sign a final contract with Granahan McCourt in a matter of weeks, with the first homes expected to be connected at the start of next year.

The Granahan McCourt-led consortium includes Enet and Nokia. The partners for the construction phase also include Denis O’Brien’s Actavo, the Kelly Group and the KN Group. The latter two partners are specialist telecommunications providers.

Eir threw a grenade into the process earlier this year by claiming it could complete the project for less than €1 billion, a fraction of the current estimate.

Eir based its estimate on the cost of its recent rollout of fibre broadband to the 300,000 rural homes, which were originally part of the State-backed scheme.