Ireland’s electricity should be 70 per cent renewables by 2030, says wind farm group 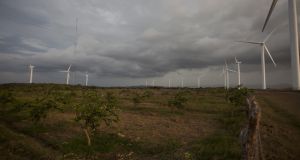 Responsible development and genuine community engagement are pre-conditions if the wind industry is going to continue to flourish, according to the IWEA. Photograph: Nicolas Garcia/AFP/GettyImages)

The Government should set an ambitious target for Ireland of producing 70 per cent renewable electricity by 2030, which would help transform the energy sector and benefit consumers, according to the Irish Wind Energy Association (IWEA).

The call by the IWEA, which represents the wind industry – including the majority of windfarm operators in Ireland – is based on the findings of a study it commissioned which shows such a target was technically possible and, if achieved, would be cost neutral for consumers.

Ireland had the required expertise built up over the past two decades “across academia, system operators, regulators, and the entire renewable industry to meet the target”, he told the IWEA spring conference in Dublin.

Following a study by Baringa, UK consultants in energy and utilities, IWEA has published its “Energy Vision” for 2030. It highlights the risk of “a return to reliance on fossil fuels towards 2030 after the 40 per cent renewables target [for electricity] set for 2020 is met”.

The study concludes Ireland can continue to be a world leader in renewable electricity, particularly wind, but:

– Construction of storage capacity in the form of 1,700 MW of new batteries by 2030 will be required;

– Power plants need to become more flexible to adjust to fluctuations in wind and solar power, though an additional 1,450 MW will be delivered from interconnectors with Britain and France.

The group’s modelling confirms the possibility of not only providing clean power for the electricity sector, but renewable energy for heat and transport. It says “426,000 electric cars could be used instead of petrol/diesel, while 279,000 heat pumps could replace existing oil boilers in Irish homes by 2030”.

Dr Connolly said a bright green future for Ireland was possible “if we have the ambition and the backing to grasp it . . . not only could our 2030 landscape be driven by clean, home grown renewables, but it will not cost more than using fossil fuels”.

Up until now the EU target of 40 per cent renewable electricity by 2020 was the key driver for the Irish wind energy sector. The EU is currently evaluating what this target should be for 2030, which is expected to be finalised next year though the Government has yet to commit to a new target.

IWEA has also outlined new proposals for community engagement and responsible development of onshore wind farms. The guidelines reflect “an increasing partnership approach, an acknowledgment of better standards in the future and greater co-operation with regional assemblies and local authorities”, he added.

IWEA chairman Peter Harte said: “We haven’t always got it right in the past but this new community engagement approach heralds a step change in how we intend to approach neighbouring communities.”

Poor engagement practices with communities in developing some projects was having a negative effect on support for further development, he added. “Responsible development and genuine community engagement are pre-conditions if the wind industry is going to continue to flourish and Ireland [is to] achieve its low carbon economy transition.”

The guidelines, due to be finalised this year by the IWEA, include proposals to create project websites at early stages of developments with information about milestones and timelines, and the appointment of community liaison officers for each project to provide contact details for the local community and to prepare annual reports for submission to local authorities.

They also require developers to commit to supporting the best-practice policy recommendations on providing community benefits and to minimising disturbance for neighbours during construction.

“We want to be good neighbours with good, responsible developments. We can do this together, and we are determined to do that. We have opened the conversation here today, we are listening and we want to grow together,” Mr Harte added.

Dr John Reilly, head of Bord na Móna PowerGen, said onshore wind generation in Ireland had moved to a better place in recent years; so much that most people would now say “wind is good” including those living near windfarms. “That is what we find,” he added.

Because of fear of the unknown, communities needed to be properly informed about developments. On completion, invariably “most of the problems go away”, Dr Reilly said.