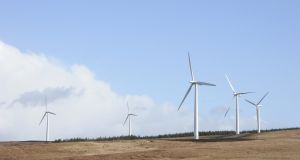 Greencoat UK Wind (UKW) which was the first renewable infrastructure fund to list on the London Stock Exchange main market, already has three wind farm operations in the North.

Its latest acquisition, which is close to Garvagh, features 15 wind turbines and has a capacity of 47.5 megawatts, and was fully commissioned last month.

Tim Ingram, chairman of UKW, said the company was pleased to start 2018 with the “acquisition of a 100 per cent ownership stake in a brand new, good sized, very high load factor wind farm, from very experienced developers”.

Mr Ingram added: “The secondary market remains active and there are several wind farms that we now expect to be acquired by others in the near future: as with all our acquisitions, price discipline is paramount.”

UKW said the acquisition has been financed by its revolving credit facility (£100 million) plus an increase in its term debt facility with Commonwealth Bank of Australia (£50 million) plus reinvestment of portfolio cash (approximately £13 million).

Meanwhile the North’s Department for the Economy released new statistics on Thursday which show that 34.8 per cent of total electricity consumption in Northern Ireland was generated from renewable sources in the North last year - 84.3 per cent of this, was in turn, generated from wind.

This was 9.4 percentage points higher than corresponding figures for 2016 and the highest rolling 12 month proportion yet.

Total electricity consumption between January 2017 to December 2017 in Northern Ireland was approximately 7,783 Gigawatt hours - of this some 2,710 GWh was generated from renewable sources within Northern Ireland.