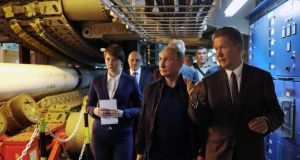 Ukraine has accused Russia of “blackmail” and urged European states to reconsider future energy deals with Moscow as a new gas dispute fuelled fears of supply disruption among EU states.

Ukraine immediately sought to save gas by ordering power stations to switch to fuel oil and by closing schools and universities in the cold weather, while also ramping up energy imports from neighbouring EU states like Poland, Hungary and Slovakia.

Gazprom and Naftogaz separately reassured the EU that they would not do anything to reduce deliveries of Russian gas via Ukraine, but the dispute stirred memories of similar rows in 2006 and 2009 that disrupted flow to European states.

On Monday, Ukraine demanded more compensation from Russia for the higher price it was now forced to pay to import gas from Europe, while Gazprom said it had officially notified Kiev and the Stockholm court that it was tearing up its previous agreements with Naftogaz.

“The time of gas blackmail by the Russian Federation against our state is already in the past,” Ukrainian president Petro Poroshenko said, restating allegations that Moscow uses fuel supplies for political leverage over its neighbours.

“The Russians really hoped that Ukraine would start taking gas from transit [SUPPLIES]. Don’t hold your breath. Ukraine is a reliable transit [COUNTRY], a reliable state and a reliable partner,” he added.

Mr Poroshenko asked why the EU would want to take gas from Russia’s planned Turkish Stream pipeline across the Black Sea and the proposed Nord Stream 2 link under the Baltic when “at any time, without any warning, supplies to the whole EU could be stopped with the aim of applying political pressure.”

“This is another piece of evidence that Russia is an unreliable supplier,” he said.

Russia insists it will do nothing to jeopardise gas flow to the EU, but Gazprom complained that the court ruling to pay compensation to Kiev suggested that “Ukraine’s economic problems should be solved at our own expense.”

“In such a situation, the continuation of these contracts is for Gazprom neither economically beneficial nor expedient. Gazprom is forced to immediately start the process of terminating these contracts in a legal way.”

The EU has contacted the energy ministers of Russia and Ukraine and offered to mediate in a dispute that came to a head as much of Europe suffered a chilling late blast of wintry weather.

“It is in the interest of Germany and the European Union, and of Russia and Ukraine, that both these countries show themselves to be reliable partners in European gas supply and guarantee continuous supplies,” German government spokesman Steffen Seibert said on Monday.

He also reiterated German support for Nord Stream 2 as a “purely commercial project” and insisted it would not deprive Ukraine of much-needed gas transit fees.