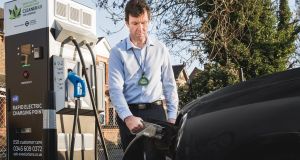 The rollout of an electric-vehicle charging network in London, in which ESB is playing a crucial role, is now fully under way with the first 100 charge points now installed and available to use.

Transport for London (TFL) has worked with suppliers including ESB on the installation of the rapid charge points across the capital where a vehicle can be charged in 20 to 30 minutes, compared to the seven or eight hours it takes at regular charging points.

According to estimates there are currently more than 118,000 electric vehicles on UK roads with London home to 10 per cent of the overall total.

ESB was one of five suppliers appointed by TFL last April to fund, maintain, operate and install the new rapid charging network across London.

The new network allows drivers to use all points regardless of the supplier and pay by credit or debit card, with no requirement to sign up to a membership scheme.

“We are proud that ESB’s expertise and track record in the electromobility sector will support the expansion of the rapid charging network across London, which in turn will help electrify the city’s iconic black taxi fleet,” said Michael Quigley, general manager of ESB in the UK.

“Electric vehicles are now seen as indispensable in addressing the major challenges of improving air quality and curbing use of fossil fuels, both in London and the wider United Kingdom,” he added.