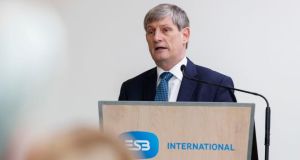 ESB swung to a loss of €31.9 million last year having had to revalue a number of assets that aren’t compatible with Ireland’s drive for a low-carbon energy output.

The semi-State company recognised a series of charges including an impairment of €276 million in relation to its generating assets. One such charge, of €141.7 million, was on its Moneypoint power plant in Co Clare which will have to stop burning coal between 2025 and 2030.

The loss for the financial year contrasted to a €186.1 million profit the previous year and comes as ESB gears up for the introduction of the integrated single electricity market (ISEM), a wholesale market arrangement for the Republic and Northern Ireland, which is designed to integrate the all-island electricity market with European markets, enabling the free flow of energy across borders.

“Our non-renewable plants are significantly written down – there’s not as much value on the older assets that we need to recover going forward,” Pat Fenlon, the group’s finance and commercial executive director, told The Irish Times.

“On a look forward we’ll be thinking of maximising the earnings over the remaining life of those assets,” he said, noting that Moneypoint, for example, could be reconfigured for biomass or gas.

Asked about the possibility of job losses, particularly in relation to joint ventures with Bord Na Móna, Mr Fenlon noted there was uncertainty but added those jobs would likely be transitioned into any biomass solutions that were created.

Operating profit before exceptional charges was recorded at €490 million for the year ended December 2017, but that too was down by €107 million driven by higher depreciation and lower energy margins which cost about €20 million.

ESB, which employs more than 7,790 people, made a capital investment of €867 million in long-term electricity and other infrastructure in the year in advance of the introduction of ISEM in May 2018. That included a €94 million investment in onshore wind, which Mr Fenlon said is likely to be slightly higher this year.

The semi-State paid a dividend to the exchequer of €60 million and noted in its statement it had paid €1.4 billion over the past 10 years.

The group said it postponed the introduction of “unavoidable electricity price increases until after the peak winter bill period” last year and continued to develop “innovative products” for customers.

ESB, which had a 34 per cent share of electricity supply across the island of Ireland last year, recorded operating costs last year of €2.7 billion, up marginally due to higher fuel, energy, operation and maintenance costs. The operating and maintenance costs of €9 million were associated with storm Ophelia. ESB plans to recover those costs over the coming years and noted costs associated with storm Emma, while not yet quantified, would be considerably less.

Revenue in the year grew by €15 million to €3.26 billion and, although small, the increase was driven by higher revenue in generation and wholesale markets and increased income in ESB Networks, which offset lower revenues in Electric Ireland as a result of lower volumes and price reductions.

On Electric Ireland’s declining market share, Mr Fenlon said: “It’s always a concern if market share is going down but over the recent months that’s stabilised and we’re satisfied with the steps we’re taking on market share.”

He noted the company had been rewarding customer loyalty, something that had stemmed decline of the market share.