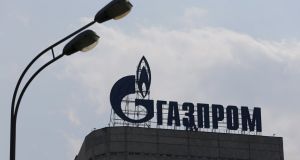 Ukraine is to seize assets belonging to Russian state-controlled energy giant Gazprom in a deepening legal dispute that has stoked fears of supply disruption among EU states.

Gazprom scrapped plans to resume gas flow to Ukraine last week after a Stockholm arbitration court ruled that it should pay $2.56 billion (€2.07bn) compensation to Kiev in a long-running row over supplies and transit fees.

The Kremlin-controlled firm is appealing against the decision, but in the meantime Kiev has ordered officials to seize Gazprom property and shares in Ukraine under separate rulings by the country’s anti-monopoly authorities.

Ukraine’s foreign ministry also ordered its embassies to find Gazprom assets around the world with a view to potential legal action to seize them.

“In this situation with Gazprom, Ukraine’s position should be tough and consistent,” said Ukrainian prime minister Volodymyr Groysman.

“Gazprom must comply with the verdict of the Stockholm arbitration court and the demands of Ukraine’s anti-monopoly agencies and the decisions of Ukrainian courts...For failing to fulfil its obligations, the Russian monopolist must bear strict responsibility.”

The value of Gazprom assets in Ukraine would be unlikely to meet the company’s compensation bill, but Kiev’s bid to seize them will deepen rancour between ex-allies that have been locked in an undeclared and multi-faceted war since 2014.

Ukrainian deputy foreign minister Elena Zerkal said on Thursday that the country’s embassies had “already been instructed to conduct a fundamental analysis: to check all registries and all open databases to find out what Gazprom has and where”.

Gazprom called the Stockholm verdict politically-motivated, and complained that it was being expected to suffer financially for Ukraine’s own economic woes.

The country of 45 million was thrown into turmoil in 2014 when a pro-western revolution ousted its Kremlin-backed leader and prompted Russia to annex Crimea and foment fighting that has claimed more than 10,300 lives and ravaged industrial eastern Ukraine.

Energy rows in 2006 and 2009 between Russia and Ukraine affected supplies to the EU, and Brussels and Berlin have urged both countries to avoid such disruption this time.

“Gas supply and transit must never be a political weapon. We expect Gazprom to supply gas to Ukraine’s transit pipeline per Stockholm arbitration decision,” US state department spokeswoman Heather Nauer tweeted on Wednesday.

“Russia should prove it is a reliable gas supplier,” she added, saying that Gazprom had “failed in its attempt to portray Ukraine” and its main gas firm as “unreliable transit partners”.