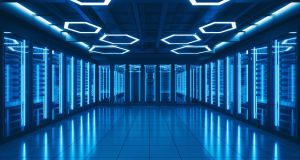 EirGrid calculates that, by 2027, data centres will use the same amount of electricity as Dublin does now. Photograph: iStock

Irish energy policy is a mass of contradictions. The Government has pledged that renewables such as wind and solar power will provide 70 per cent of all electricity used here by 2030 from about 30 per cent now.

All very laudable. Until you realise that the same administration wants to lure data centres here. These buildings, factories full of computer servers, use vast quantities of energy.

National grid operator EirGrid calculates that, by 2027, data centres will use the same amount of electricity as Dublin does now. So, while the Government is seeking to overhaul our energy system, it is putting it under extra pressure by encouraging increased demand.

Even more ironically, the State is the Irish energy industry’s biggest polluter, through its ownership of the ESB. That company owns the country’s biggest power plant, Moneypoint, which burns coal, and two peat-fired electricity generators, Lough Ree and West Offaly.

ESB intends to close the peat plants while the Government wants it to stop using coal to generate power by 2025. Assuming this happens, we will have to build more wind farms and probably a natural gas-burning plant to replace them.

This week, credit ratings agency Moody’s predicted that growing demand from data centres, combined with the need to close and replace the older fossil fuel generators, could push wholesale electricity prices to about €60 per megawatt hour by 2022 from €56-€57 now.

Suppliers tend to pass on wholesale price increase to their customers. So yes, you’ve guessed it: families and employers will ultimately pay for the Government’s logic-defying and contradictory energy policies.