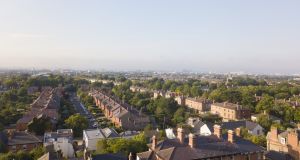 Rather than try to force the hand of the Central Bank might the Government not be better advised to address how to limit the cost of the largest component of a new house price – the land on which it is built?

The only certainty about housing policy in Ireland is that everyone has an opinion; to date nobody has actually found a fix. The latest furore comes with the publication of the Dublin Economic Monitor, produced by EY and DKM on behalf of the four local authorities in the capital.

The alarm focuses on the revelation that housebuilding is stalling in the city. Housing completions are down close to 14 per cent in the second quarter, it notes, the first fall in over four years. Commencement notices at the other end of the building chain are also down, by 18.5 per cent.

So who is to blame?

Unsurprisingly the first response was to lash out at the Central Bank which has in place a set of rules governing how much people can borrow.

Essentially the limit is 3.5 times earnings, and the loan can not cover more than 80 per cent of the purchase price. There is some dispensation for first-time buyers, who can borrow up to 90 per cent of the house price, and if they buy a newly-built home secure another 5 per cent by way of a refund of income tax paid under the Help-To-Buy scheme.

Central Bank rules are there for a reason. Most of us – though apparently not everybody – still recall the damage that loose mortgage rules and excessive leverage caused for a generation of Irish homeowners. Many are still fighting to emerge from the arrears built up after the financial crash. Others must contend with the ongoing negative equity which limits their capacity to move.

The rules are not out of kilter with other jurisdictions. All countries have lending rules.

In the UK, where the average property price is slight above the Irish average of €263,000, it is common to be able to borrow four times your earnings. But in France they are more careful about the loan-to-value rates, and also have rules limiting how much of your income can be accounted for by property-related outgoings – 30 per cent seems to be the threshold.

And of course this being Ireland, there is the wriggle room.

The Central Bank rules allow for “exceptions” which can account for a fifth of all lending to existing homeowners moving house – the very group identified as constrained in the commentary around the economic monitor.

Some 20 per cent of lending to first-time buyers, the primary market for new homes, can also exceed the earnings multiples.

Rather than try to force the hand of the Central Bank – an idea that is getting worryingly close to consensus – might the Government not be better advised to address how to limit the cost of the largest component of a new house price – the land on which it is built?

And maybe some of those homeowners struggling to sell might resign themselves to not matching the outsized sums they initially paid back in the boom era.