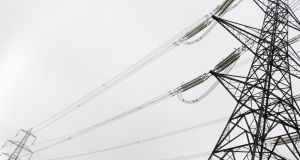 Wholesale electricity prices could hit €60 a MWh by 2022 as the Republic shuts coal and peat plants and energy demand grows, a report published on Tuesday says.

Electricity prices could rise as demand from data centres grows and the Republic shifts from fuels such as coal and peat to renewables, analysts say.

Wind energy now supplies about a third of the Republic’s electricity needs but generators, including State-owned ESB, also burn “carbon-intensive” fuels such as coal and peat, alongside natural gas, to provide power.

The agency estimates in a report published on Tuesday that wholesale electricity prices could hit €60 a megawatt hour (MWh) by 2022 as the Republic shuts coal and peat plants while energy demand grows.

Analysts Graham W Taylor, Matthew Brown and Neil Griffiths-Lambeth say the increasing number of mainly multinational-owned data centres, whose construction the Government encourages, will drive much of the demand.

They calculate that total all-Ireland electricity demand will hit 44 terawatt hours, enough to power more than 40 million homes, by 2022, a 13 per cent increase from 2018.

“A significant driver of demand growth is from data centres, particularly in the Republic of Ireland,” the trio says.

They note that national electricity grid manager, EirGrid, estimates that demand from data centres will treble over the 10 years to 2028, accounting for 29 percent of total consumption.

Moody’s has increased its estimate of likely wholesale prices through to 2022 by €5 a MWh to €55-€60 a MWh. Yesterday’s wholesale price was about €57 a MWh, according to EirGrid.

The ESB-owned Electric Ireland remains the biggest player in the market, with 48 per cent, followed by Bord Gáis Energy at 19 per cent, SSE Airtricity on 13 per cent and Energia on 9 per cent.

Moody’s, which assesses the ESB’s and Energia’s ability to repay their debts, indicates that increased demand and increased prices will benefit both.

However, Mr Taylor notes that Energia’s plans to invest in its business, flagged this summer, pose some risk to that group.

Mr Taylor, Mr Brown and Mr Griffiths point out that the ESB has already pledged to close West Offaly and Lough Ree peat-fired plants by the end of 2020.

They add that the State company has not formally said that it will close Moneypoint, the 885MW coal-burning electricity plant on the Shannon estuary, which is the Republic’s biggest individual generator.

However, the analysts note that regulators assume Moneypoint will shut by 2025, following the Government’s commitment to phase out coal-fired electricity generation by that year.

They believe that electricity from new wind farms and an extra natural gas-powered generator, which should begin operating by 2025, will replace the coal and peat plants.

Meanwhile, Moodys says that Ireland has been importing electricity from Britain, via two lines running underneath the Irish Sea, this year.

However, they expect this to reverse in coming years, as wholesale prices here will be slightly lower than those in Britain.