Role and sourcing of gas to be examined 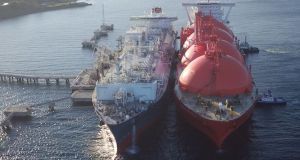 The outcome of the process will play a role in the Government’s decision whether to support a funding application for the controversial Liquefied Natural Gas (LNG) terminal at Shannon.

The Government has approved a major review of the security and sustainability of Ireland’s energy supply as the State seeks to move towards a target of 70 per cent electricity from renewables by 2030.

The review will also assess the role of gas during the transition, “and consider how and from where it is sourced”. The outcome of the process will play a role in the Government’s decision whether to support a funding application for the controversial Liquefied Natural Gas (LNG) terminal at Shannon.

Minister for Climate Action Richard Bruton has previously said he will await the outcome of this review, and a second review being undertaken by the European Commission, before deciding whether or not to support the application.

The potential use of the terminal to import fracked gas from overseas has proved a lightning rod for criticism of the Government by climate change activists. Gas is seen by the Government as a potential transition fuel, due to its relatively low levels of carbon emissions.

The review will not be confined to examining the potential role of gas.

Mr Bruton has written to several semi-State utility companies – Eirgrid, the ESB, Bord na Móna and Ervia – to seek their input, as well as the Commission for the Regulation of Utilities.

Those entities will be expected to work alongside government to consider the role that can be played by other technologies, including battery storage, pumped storage, the interconnection of the Irish electricity system with grids overseas, and the possibilities for Carbon Capture and Storage.

Mr Bruton said the review was needed to identify ways to manage the supply of electricity onto the system during and after the intended transition. The review will also examine the actions that need to be taken to move from the reduced carbon emission target in 2030 to a fully carbon neutral system in 2050.

“We will need to look at the best mix which will maintain energy security, while ensure we are meeting our climate commitments,” Mr Bruton said.