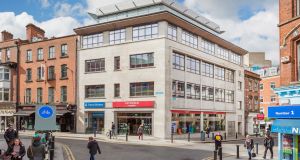 CGI of the newly refurbished former Department of the Environment showroom

A property development company associated with developer Francis Rhatigan and his family has made a handsome profit on the sale of a newly redeveloped shop and offices at the junction of Trinity Street and St Andrew’s Street in Dublin city centre.

The blue chip investment off Wicklow Street has been purchased in an off-market deal by New Ireland Assurance for about €12 million, which will show an initial yield of 4.6 per cent.

The long-running former showroom of the Department of the Environment was acquired about four years ago on behalf of the Rhatigan family company Winterbrook for a surprisingly low figure: €3.6 million. The well-known “property” family subsequently received planning approval to introduce radical changes, including the creation of 587sq m (6,328sq ft) of retail facilities at ground, basement and first-floor levels, and 608sq m (6,544sq ft) of office space on the second and third floors, as well as a new fourth-floor penthouse with an outdoor balcony.

In 2016 the entire retail space was let to Cotswold Outdoor, a UK specialist in outdoor clothing, to allow it to embark on its first venture outside the UK apart from its association with Snow and Rock Group. The new Dublin shop agreed an initial annual rent of €275,000 under a newly signed 20-year lease.

The entire office space was let to the fast-growing firm of Tracey Solicitors on a 15-year lease at an initial annual rent of €300,000 or €495 per sq m (€46/sq ft). Tracey has attracted increasing attention since relocating from the former EBS building on Westmoreland Street to such a favoured location half way between College Green and Wicklow Street.

Pedestrian traffic in that area has grown significantly since H&M opened a new store in the former Northern Bank premises next to St Andrew’s Street Post Office. Visitor numbers are expected to get a further boost when St Andrew’s Church on the opposite side of Suffolk Street is converted shortly for use as a large-scale dining facility.

The new arrival is likely to be of some concern to another food specialist – Fallon & Byrne, which has traded successfully around the corner on Exchequer Street for more than a decade.

Ben Pearson of Agar advised Winterbrook on the sale to New Ireland Assurance while Christopher Belton of Lisney acted for the purchasing company.