€80m sought for development of 216 apartments at Santry Demesne 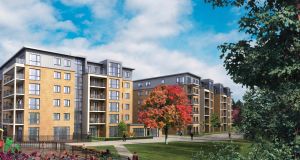 Bridgefield apartments: for sale as a single private investment in expectation it will be bought by an overseas fund.

Another substantial apartment development under construction in the north Dublin suburbs goes for sale as a single investment in the expectation that it will be of interest to several Irish funds as well as overseas buyers.

Agent Hooke & MacDonald is quoting €80 million for the 216 apartments being developed by the Cosgrave Property Group at Santry Demesne in Dublin 9 and due to be completed by the end of 2019.

The Bridgefield apartments at Northwood are expected to bring in an annual rent roll of €4.65 to €4.9 million, reflecting a yield of 5.8 to 6.1 per cent.

With several large-scale apartment developments either for sale or recently sold by different Dublin developers, there is considerable curiosity as to why more of them are not being built out and sold as individual apartments to meet the pent-up demand.

In most instances, the investment companies are buying completed blocks with the intention of holding on to them as long-term investments alongside other property assets.

The Cosgrave Property Group has taken a twin approach over the past six years. By the end of this year, it will have provided a mixture of more than 1,500 houses and apartment for both the large-scale investment groups as well as individual buyers.

In 2016, Cosgrave broke new ground when it pre-sold 197 apartments at Honeypark in Dún Laoghaire to SW3Capital/Tristan Capital Partners for €72.5 million. The following year Cosgrave sold another 319 apartments at the Leone and Charlotte buildings in the same park to the German fund Patrizia for €132 million.

Donald McDonald of Hooke & MacDonald said the twin approach has allowed Cosgrave to speed up the supply of housing. On most of its sites it supplied a mixture of houses and apartments for sale as well as rent. The Cosgrave-owned Cualanor site in Dún Laoghaire had apartments for sale and rent, while land adjoining Bridgefield in Santry will have a mix of 104 three and four-bedroom houses for sale individually this year.

Santry Demesne has an excellent range of parklands, retail parks, business hubs and neighbourhood centres, as well as a good roadway system convenient to the M1 and airport.