While the ESB has not imported coal from the Cerrejón mine since 2018, it has burnt the coal at its Moneypoint power plant since 2001 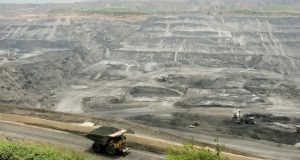 The ESB has landed itself in hot water for importing coal from a Colombian mine which is at the centre of suspected human rights and environmental violations.

The Global Legal Action Network (GLAN), supported by development agency Christian Aid Ireland and a coalition of other human rights and environmental groups, have made a formal complaint to the Organisation for Economic Co-operation and Development (OECD) through its representative in Ireland.

The complaint alleges that State-owned ESB breached its human rights responsibilities – under the OECD’s guidelines for multinational enterprises – by importing coal from the Cerrejón mine in northern Colombia.

It claims that ESB failed to take the necessary actions to identify, mitigate and prevent human rights abuses linked to the Cerrejón mine despite well-documented evidence of forced displacement of indigenous and Afro-Colombian communities and intimidation of activists, as well as pollution of local rivers and contributing to air pollution.

Parallel complaints have also been filed with OECD representatives in Australia, the UK and Switzerland against the three owners of the Cerrejón mine – BHP, Anglo American and Glencore.

While the ESB has not imported coal from Cerrejón since 2018, the mine has supplied the bulk of coal burnt at ESB’s Moneypoint power plant in Co Clare since 2001.

When contacted, ESB confirmed it has purchased coal from the Cerrejón mine in the past but a small percentage of the mine’s total output.

The company also referred to a report conducted by industry group Bettercoal, which found that Cerrejón met or substantially met most of its obligations in the areas of ethics, human rights and social performance and environment.

The ESB said senior managers had visited the Cerrejón site and met directly with workers, community leaders and trade union officials, and that the company was “committed to remaining vigilant on all of the issues” .

It also noted that ESB’s generation at Moneypoint had declined significantly as renewable electricity replaces coal-fired production in Ireland.

Gerry Liston, legal officer with GLAN, said the group’s complaint outlines significant breaches by ESB of the OECD Guidelines for Multinational Enterprises. “It must recognise its human rights obligations and immediately end its relationship with Cerrejón for good,” he said.

Sorley McCaughey of Christian Aid Ireland said it wanted ESB to make a public statement saying it was not going to import any more coal from the mine and apologising to the communities for the damage done to the environment in the area.

“The Cerrejón case underscores the inadequacy of the current voluntary guidelines for multinational companies,” he said.

A separate complaint with the OECD’s National Contact Point in Ireland has also been lodged against Dublin-based Coal Marketing Company (CMC), which is the exclusive marketer of coal from the Colombian mine.

The complaint is the latest in a long line of criticism of the Cerrejón mine. In 2019, the UN’s Committee on the Elimination of Racial Discrimination recommended that Ireland “consider stopping purchasing coal from the Cerrejón mine”, while in September 2020, several prominent UN human rights experts called for some of its operations to be suspended as they had “seriously damaged the environment and health of the country’s largest indigenous community”.