US budget deficit forecast to blow out by mid-century 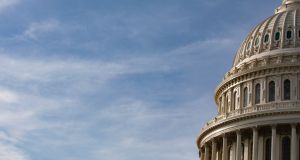 “Not since World War II has the country seen deficits during times of low unemployment that are as large as those we project,” CBO director Philip Swagel said in a statement.

The US will rack up budget deficits totalling $13.1 trillion (€11.9 trillion) over the coming decade and continuing to rise to levels “unprecedented in US history”, according to projections from the non-partisan Congressional Budget Office.

In its twice-yearly report on the budget and economic outlook, released on Tuesday, the CBO predicted a budget shortfall of $1 trillion in 2020, or 4.6 per cent of gross domestic product, and set out a deteriorating longer-term picture based on recent changes to the tax code and the ageing US population.

“Not since World War II has the country seen deficits during times of low unemployment that are as large as those we project, nor, in the past century, has it experienced large deficits for as long as we project,” CBO director Philip Swagel said in a statement.

This difference reflects changes to the tax code made at the end of last year. Congress repealed a corporate tax on high-cost healthcare plans and lifted self-imposed caps on some kinds of spending.

The CBO is more confident that the economy will continue to grow over the next year, projecting 2.2 per cent GDP growth in 2020, up from its last projection in August of 2.1 per cent. Its long-term growth estimates remain the same, at 1.8 per cent until 2030.

The long-term outlook also reflects a change in the CBO’s assumptions about interest rates. As the costs of borrowing continue to drop globally, the office now projects the US Treasury will be paying 3 per cent interest on 10-year debt in 2029, down from 3.2 per cent predicted in August. – Copyright The Financial Times Limited 2020

1 Knock gets visit from world’s largest passenger plane
2 How do you know if you are wealthy? It’s not straightforward
3 Galway development could transform skyline with 21-storey tower
4 Planning permission refused for major new office block in Galway city centre
5 Barclays scraps system monitoring how long staff spent at desks
6 Chinese state may bail out Avolon’s main shareholder
7 High Court overturns permission for height increase in Johnny Ronan apartments
8 Judge asks if injunction being sought ‘to facilitate a dog’
9 Store manager unfairly dismissed for hugging staff members awarded €15,000
10 How can I view my dead brother’s will if I’m not the executor?
Real news has value SUBSCRIBE