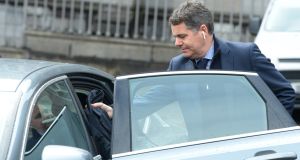 Minister for Finance Paschal Donohoe has had a helping hand in terms of GDP and the deficit, but unemployment is likely to be more stubborn and difficult to correct. File photograph: The Irish Times

When the EU-IMF troika were in town and watching over the public purse, the then government had a policy of underpromising and overdelivering on financial targets. This time around, the Government seems to be issuing stark warnings about the economy in the hope, or only to find, the reality is less bleak.

Its prediction, back in April, that the economy would contract by 10.5 per cent this year as a result of Covid has been revised to just 2.5 per cent. And the Irish Central Bank believes it will be less than 1 per cent. The headline contraction in gross domestic product (GDP) is likely to be less severe because of a bigger than expected trade surplus, the result of strong pharma and computer service exports. Okay so GDP is a bad measure of domestic activity here. It is, however, crucial to our debt metrics and our borrowing power.

On the budget deficit, the €30 billion figure, predicted originally, has in recent weeks been revised down to €25 billion on the back of more resilient tax receipts and is now forecast to be €21 billion. The Government’s fiscal position is being supported by better than expected corporation tax receipts, which were €2 billion above profile in September.

This is not to say the Government has known all along that these figures would be better than originally forecast – it is as surprised as anyone else – just that it has learnt a valuable lesson in public communications from the previous crisis, namely not to sugar coat bad news, particularly when the full extent of the crisis is yet to emerge.

And we should not fall into the trap of thinking the coronavirus hit isn’t that bad. For the sectors and workers in the line of fire, it’s particularly brutal. It has left us with an elevated level of unemployment – roughly 15 per cent, on a par with the worst of the financial crisis – and one that may prevail for some years. The Government has had a helping hand in terms of GDP and the deficit, but unemployment is likely to be more stubborn and difficult to correct.