Hit to Irish economy from coronavirus likely to be minimal, Central Bank says 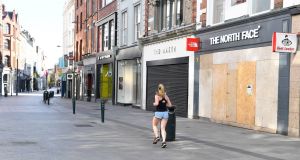 A woman jogs down a deserted Grafton Street in Dublin on May3rd. Photograph: Aidan Crawley/EPA

The Irish economy is likely to experience only a small contraction of about 0.4 per cent this year, with stronger-than-expected exports from the pharma sector offsetting much of the shock from Covid-19, the Central Bank of Ireland has indicated.

However, it warned that a no-deal Brexit, now the bank’s working assumption, would knock 2 per cent of economic growth next year.

In its latest quarterly bulletin, the Central Bank said it was assuming that trade between the EU and the UK moves to World Trade Organisation (WTO) terms, which entails tariffs, from January 1st, 2021.

Ireland’s food exports are forecast to drop by about a third if both sides fail to agree a future trade deal.

The Central Bank said the transition to a WTO trading relationship was likely to frontload the losses arising from Brexit, subtracting around 2 percentage points from GDP growth in 2021 and 0.3 percentage points in 2022.

As a result, it has downgraded its forecast for growth next year to 3.5 per cent next year rising to 4.7 per cent in 2022.

“In our latest forecasts it was considered prudent to make a change and assume that the EU and the UK move to trading on WTO terms from January 1st next,” it said.

“Such a development would have the effect of increasing costs, raising uncertainty and disrupting trade flows. While the impact would differ across sectors and regions, for the economy as a whole it would detract from the projected recovery, especially in 2021,” it said.

In its latest quarterly bulletin, the Central Bank said stronger-than-expected exports, particularly from the pharma sector, and more robust consumer spending had mitigated the decline in overall activity arising from coronavirus.

As a result, the economy was expected to contract by just 0.4 per cent in gross domestic product (GDP) terms this year, instead of the 9 per cent decline it predicted in July.

“This will be a better performance than any other advanced economy that I’m aware of,”the Central Bank’s director of economics and statistics Mark Cassidy said.

The Department of Finance last week upgraded its growth outlook for the economy, predicting it would contract by 2.5 per cent in 2020, having previously forecast it would shrink by more than 10 per cent.

“Since the trough reached in the April-May period, Irish economic activity has rebounded with the re-opening of the economy,” the Central Bank said.

“ However, the recovery has been partial and uneven and, in many cases, levels of domestic-focussed economic activity remain well below pre-pandemic levels,” it said.

Underlying domestic demand – a better measure of domestic activity in Ireland’s multinational-heavy economy – is still projected to fall significantly in 2020, declining by 7.3 per cent, the Central Bank said, while unemployment would remain elevated at 15 per cent.

Mr Cassidy also warned that more restrictions to curb the spread of the virus, including a Level 5 shutdown, the Government’s highest level of restrictions involving the closure of all non-essential business, would alter the outlook and lead to a further deterioration in employment.

In its report, the Central Bank contemplates the impact of more severe Covid-19 restrictions and a protracted deterioration in the international environment.

In this scenario, economic recovery is curtailed and delayed with GDP declining by 1.1 per cent this year and 0.3 per cent next year, followed by a muted recovery in 2022.

The Central Bank’s noted that the better-than-expected economic outlook has been led by “unexpectedly robust growth in exports of pharmaceuticals and business services” and stronger-than-anticipated consumer spending.

Nonetheless, it said recovery had been uneven.