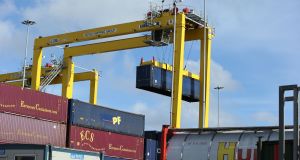 Despite experiencing a strict and prolonged lockdown, the economic damage done by Covid-19 has been “relatively benign”, a study by the Economic and Social Research Institute (ESRI) has found.

Ireland experienced one of the largest falls in household consumption in Europe during lockdown as businesses closed and travel restrictions were imposed to limit the spread of the virus, according to the study.

However, robust export growth, particularly in computer services and pharmaceuticals, meant economic activity, as measured by gross domestic product (GDP), did not fall by the extent expected.

The study found that GDP fell by 9 per cent cumulatively over the first two quarters of 2020. This compares with a 23 per cent fall in the UK and a 24 per cent drop in Spain.

As a result, the extent of the damage done to the economy this year by Covid-19 is expected to be much less than previously thought. The findings tally with the Central Bank’s latest analysis, published earlier this week, which suggests the economy will contract by just 0.4 per cent in GDP terms this year. This is likely to be the strongest performance of any advanced economy.

The ESRI’s study, entitled “The lockdown tale of two economies in Ireland: how big tech and pharma bucked the trend”, highlights the divergence between the economy’s robust export sector and the more labour intensive domestic sector, which was hit harder by restrictions and shed jobs as a result.

It shows that while the value of industrial output, which includes pharmaceuticals, rose by 10 per cent in the first half of 2020, construction fell by more than 40 per cent, while arts, entertainment and recreation was down by nearly 75 per cent. The ESRI said both of these sectors saw the largest declines of any EU country or the UK. There was also big declines in hospitality and retail, which led to a rapid spike in unemployment.

“This duality in performance can be explained by a concentration of Irish exports in lockdown-resistant sectors: 26 per cent of Ireland’s exports are computer services and a further 11 per cent are medical and pharmaceutical goods,” the report said.

The Republic is a global hub for pharma and medtech, playing host to 24 of the top 25 biggest players, including Johnson & Johnson, Roche, Pfizer, Novartis and AbbVie. Pharma exports account for about 60 per cent of total Irish goods exports, worth €50 billion a year.

Ireland is also the biggest per capita tech hub in the world – responsible for 30 per cent of the EU’s digital exports – with every name from Apple to Google to Facebook using the State as a bridgehead into the EU’s lucrative consumer market.

While the impact on the economy of these high-value export sectors is disproportionate to their employment share, the ESRI noted that many of the companies in big tech and pharma are indeed large employers and “do have a real presence on the ground”.

“The Irish economic experience in lockdown is a tale of two economies: the domestic economy has been severely hit with sectors such as construction, arts and recreation, and hospitality experiencing some of the largest declines across Europe,” the ESRI’s Conor O’Toole said.

“However, exports from multinationals in computer services and pharmaceuticals increased relative to 2019 leading to a much more benign impact on overall GDP.

“While the impact on Irish economic wellbeing has been severe when measured by job losses in the domestic sector, our largest export activities appeared relatively immune to the lockdown restrictions.

“In some ways, this can buy us scope to continue to provide policy support to the domestic economy, knowing that the multinational sector is likely to continue to remain buoyant,” he added.

9 BOI to close 103 branches; locked out of Covid support; and the scourge of work email