Why income tax receipts are immune to Covid-19 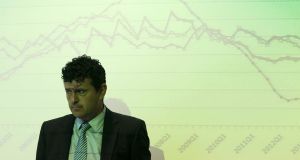 Kieran McQuinn of ESRI noted that the Government’s expected €25 billion budget deficit this year would be €2 billion worse if it wasn’t for another unanticipated influx of corporation tax.

One of the most puzzling aspects of the current crisis is income tax.

If you had told Department of Finance officials in February when unemployment was at a 13-year low of 4.8 per cent that it would spike to nearly 30 per cent in the space of the few months, apart from panicking, they would have factored in a colossal loss of revenue for the Government via crashing income tax receipts.

The latest exchequer returns for September, however, show income tax generated €15.4 billion so far this year, just 2 per cent or €323 million down on the same period last year. Astonishing in the context of the Covid-19 crisis.

The resilience of the Government’s main tax head was mentioned on Wednesday by Kieran McQuinn of the Economic and Social Research Institute (ESRI) as one of the more remarkable aspects of the crisis.

“This suggests that in the main, the labour market impact of Covid-19 appears to be concentrated in relatively low-paid jobs,” it said.

“Many who lost their jobs may have been outside the income tax net altogether or work in sectors that have a high proportion of low wage and/or part-time employment,” it said, noting that this contrasts with those employed in relatively “tax rich” sectors such as FDI (manufacturing/ICT) and financial services.

Another thing to note according to McQuinn was that the Government’s expected €25 billion budget deficit this year would be €2 billion worse if it wasn’t for another unanticipated influx of corporation tax.

The business tax generated €7.5 billion in the first nine months of the year, €2.3 billion above profile, according to the latest exchequer returns, providing support for the public finances at a welcome time.