Board minutes show Covid-19, cybersecurity and investment strategy were discussed 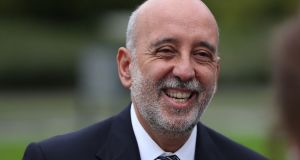 Central Bank of Ireland governor Gabriel Makhlouf is now in receipt of a UK public service pension, having recently turned 60, the bank’s board was informed at a meeting in July, minutes of which were published on Tuesday.

The pension is in addition to the governor’s annual almost €286,800 bank salary. A spokeswoman for the bank declined to comment on the UK pension benefit, saying it is a private matter.

He subsequently climbed the ranks of HM Revenue and Customs to head up its debt management and banking directorate, having also done a stint as principal private secretary to then chancellor of the exchequer Gordon Brown at the start of Tony Blair’s administration.

In 2010, he joined the New Zealand treasury and was appointed chief executive and secretary the following year, before returning to Europe last year to take over as head of the Irish Central Bank.

The bank’s board – known internally as the Central Bank Commission – also discussed Covid-19, cybersecurity, the bank’s investment strategy, new policy for staff trading of shares and bonds, and the 200 protected disclosures made to the bank during 2019, among other matters, according to the minutes.

In relation to Covid-19, one unnamed member of the commission “highlighted the importance of looking beyond 2021 in terms of the potential direction of the economy”.

“He noted the very large figures on household savings and the implications this may have for the economy and for the financial sector in terms on how it might be utilised over the coming years,” the minutes said. Central Bank deputy governor Sharon Donnery said the executives were “mindful of the need to think ahead but noted the uncertainties that currently existed”.

Under the new staff trading policy, employees have been given a list of companies where they cannot buy shares or bonds. In addition, staff are subject to pre-approval and disclosure requirements on other investments in listed securities.