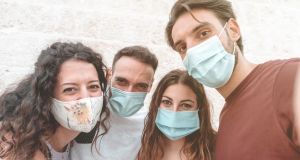 It’s a paradox that the best role models often don’t set out to become role models at all. The most influential people inadvertently inherit that mantle through a talent or trait that makes younger people admire them and/or want to be them.

At this point, their newfound status risks being derailed in one of two ways. They can be burned by the spotlight of expectation, unable to live up to the flawlessness suddenly demanded. Or, high on attention, they can embrace their ego a little too fully, becoming self-important, smug and prone to believing their own hype.

This is the quandary facing media agencies charged with procuring the platform of what we now call “influencers”, also known as endorsers, taste makers, paid early adopters. Which ones will be any use?

The question arises in the most desperate of circumstances. Earlier this week, Micheál Martin mused about the Government “maybe” hiring influencers to communicate with young people on “the various platforms they access”. Indeed, he felt this was “key” to persuading them of the need to socially distance, cut their contacts and take other measures necessary to curb the spread of Covid-19.

For all the carping and cringing that followed, it is hard to argue with Martin’s conclusion. While advertising on every radio station and in every newspaper in the State gives the Covid-19 public health campaign a wide reach – and the additional social media, digital display and audio streaming adverts also help – there will still be a cohort well practised at blanking anything that looks or smells like an advert.

This is where “influencers” come in. The best ones in this situation won’t be the conventional types already on the agency books, but the imperfect sporting, music and youth-culture figures not usually known for their stream of #ad and #spon content.

But whoever delivers the message, a “show, don’t tell” approach would seem wise. Thousands of well-meaning social media users repeating #wearamask and other hashtags only goes so far, and can be counter-productive. Impatience, anger and guilt tripping might feel like appropriate reactions to pandemic irresponsibility, but they are unlikely to be effective ones. A non-hectoring normalisation of mask wearing and other precautions is what is required now.

There will always be people on the periphery who remain unreceptive, and arguably that’s where the power of advertising ends and the need for enforcement begins. But just because the crisis demands an urgent response doesn’t mean the subtler arts of persuasion can be thrown away.