New figures show unemployment rate increased by 0.1% this month to 4.6% 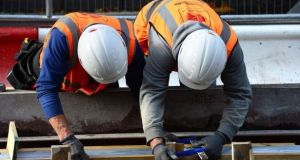 The jobless rate is nearly three percentage points below the current euro zone average of 7. 5 per cent

The number of unemployed people fell by nearly 26,000 in the year to July, new figures from the Central Statistics Office (CSO) show.

The unemployment rate increased by 0.1 per cent this month to 4.6 per cent but was down from 5.8 per cent for the same month a year earlier.

The youth unemployment rate rose to 10.3 per cent from 10.1 per cent in June.

Commenting on the latest figures, Alan McQuaid, former chief economist at Cantor Fitzgerald, said while there was a slight increase in the unemployment rate this month, the current rate is an almost eleven-and-a-half percentage point improvement from the peak of16 per cent hit in January/February 2012 during the financial crisis.

Furthermore, the jobless rate is nearly three percentage points below the current euro zone average of 7. 5 per cent.

“Although the overall number of people out of work picked up in July, the summer months can be distorted by the arrival of school leavers and some education workers on to the Live Register. We still think the rise in employment appears far from over,” said Mr McQuaid.

Andrew Webb, chief economist at Grant Thornton Ireland, said the second consecutive monthly increase in the unemployment rate coincides with a ramping up of rhetoric on a “no deal” Brexit.

“Caution must now be the watchword as we move into the months ahead as some economic indicators, in addition to the latest unemployment statistics, point towards a softening of economic momentum,” he said.