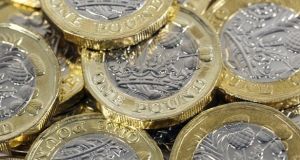 Sterling fell to a new two-year low versus the dollar on Tuesday and edged closer to 92 pence against the euro amid growing speculation that Britain is headed for a messy no-deal Brexit from the European Union.

The pound has fallen against the dollar for the past four trading days on worries that Britain will exit the EU without agreements on trade and other key issues. There is also a chance that new prime minister Boris Johnson will call an early election.

The market interest rate – or yield – on Ireland’s benchmark 10-year bonds has increased by 0.06 percentage points since Mr Johnson took office last week, to 0.172 per cent.

Against a basket of six major currencies, the dollar traded near a two-month high. The Fed is expected to cut rates by 25 basis points on Wednesday, and investors are watching for clues on whether the move may be a one-off or the first in a series of several cuts, as many traders are anticipating.

Uncertainty about how Britain will divorce itself from the EU and the resulting economic impact could keep the pound on the back foot for weeks to come.

Traders expect more volatility in sterling, pushing the price up to hedge against large swings. Implied volatility over a three-month period has risen in July by the widest margin since the financial crisis in 2008, according to Bloomberg data that track activity in the options market.

“The spectre of Brexit casts a shadow again,” said Antje Praefcke, currencies analyst at Commerzbank. She said investors were increasingly anxious over the hard line pursued by Mr Johnson’s government over Brexit talks and his vow to pull the UK out of the EU by the end of October with or without a deal.

Karen Ward, market strategist at JPMorgan Asset Management, said: “Whilst ‘no deal’ is still not our expected outcome, the newsflow – politically and economically – is likely to get worse before it gets better, so sterling may have further to fall.”

UniCredit on Tuesday said it now sees a 40 per cent chance the UK will leave the EU with no deal, up from its previous forecast of 25 per cent to 30 per cent. Chiara Silvestre, an economist at the Italian bank, said she expected Mr Johnson to call snap elections in early September “in pursuit of a mandate from the electorate for a no-deal Brexit”.

Mr Johnson will travel to Northern Ireland on Wednesday. The prime minister’s tour around the UK has been accompanied by front page headlines about the sharp drop in the pound, and that is being keenly felt by British tourists heading abroad for their summer holiday.

Guy Foster, head of research at Brewin Dolphin, said: “The prime minister’s negotiating strategy revolves around making the market’s most feared outcome look like his preferred outcome. Hence we are seeing a lot of weakness in the pound.”