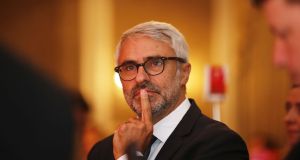 Pascal Saint-Amans, the tax director at the Organisation for Economic Co-operation and Development. Photograph: Nick Bradshaw

The State should support the drive to reach an accord on the reform of corporate taxes and cannot continue to say “no, no, no” to international efforts for change, according to the man leading the efforts to reach agreement on the issue at the OECD.

The time for “aggressive tax behaviour has come to an end”, according to Pascal Saint-Amans, the tax director at the Organisation for Economic Co-operation and Development (OECD), who has criticised a key decision made by the last Irish government on tax changes, but said that the OECD tax reform programme now under way could offer valuable certainty to the State in future.

While Saint-Amans said the State had made important changes as part of the OECD reform process, he criticised the length of time the country is taking to phase out the controversial “double Irish” tax allowance. This has been a key part of our regime, helping companies to shift profits offshore legally via a structure involving a company incorporated in Ireland but tax resident elsewhere.

The “double Irish” tax scheme was abolished for new companies arriving here by then minister for finance Michael Noonan in the 2015 budget, but the relief was extended until 2020 for companies already using it. The length of this extension “wasn’t smart and was probably too aggressive”, Mr Saint-Amans said. “Maybe you should have ended it earlier.”

The State has based its tax approach over the years on its relationship with the US, according to Mr Saint-Amans, who has already piloted through the first phase of tax changes under the so-called base erosion and profit shifting (BEPS) process.

However, the US is now pushing for change and for a reallocation of the rights to collect taxes, he said. This means change is on the way, he added, and it is best to reach an agreed way forward. Otherwise this will “create new tensions in a world where tensions are already very big”, he said, speaking in a recent interview with The Irish Times.

The US and France are already at loggerheads over a French plan to impose a digital sales tax – a tax on the revenues of some of the digital activities of big companies, mainly from the US, in the French market. The US is pushing for a global agreement on these issues.

While Ireland gained investment and revenue from the first phase of the OECD changes, the second phase – due to be phased in after 2020 – brings challenges for it, Mr Saint-Amans said. How tax revenue might be affected in various countries due to these changes will be part of an impact assessment. The main concern in the State is on the proposed minimum corporate tax rate, which could affect the ability to attract foreign direct investment (FDI), depending on where the rate is set.

“The impact on FDI is key for Ireland,” Mr Saint-Amans said. He said he did feel that the State had “set the tone” for the process with a tax system with a broad base and a relatively low rate. Asked what rate he felt might emerge as a minimum corporate rate if agreement was reached, Mr Saint-Amans said this was not clear, but that he “wouldn’t be surprised” if something close to the State’s 12.5 per cent rate emerged as a benchmark.

While Mr Saint-Amans said there was sympathy for countries that might lose revenue in the next phase of the reform process , he said that countries like the Republic would also stand to lose if there was no OECD agreement and a host of unilateral measures in areas such as a digital sales tax.The EU has put its plans in this area – opposed by the State – on hold pending the OECD process. Unlike in the EU process, the State has no general veto on the OECD programme and has underlined its commitment to the BEPS process, while expressing reservations about some aspects of it.

8 EY Ireland pledges to be ‘zero carbon’ business by 2025

9 Family businesses are welcome winners in the pandemic