Irish corporate tax in the spotlight, Pepper profits, and why hotdesking is hell 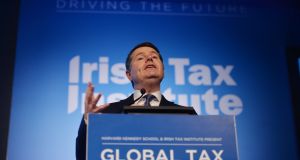 Ireland cannot continue to say “no,no,no” to international efforts for the reform of corporate taxes, according to the man leading the efforts to reach agreement at the OECD. Photograph: Alan Betson

Ireland should support the drive to reach an agreement on the reform of corporate taxes and cannot continue to say “no, no, no” to international efforts for change, according to the man leading the efforts to reach agreement at the OECD. The time for “aggressive tax behaviour has come to an end,” according to Pascal Saint-Amans, in an interview with Cliff Taylor.

Brian Conlon, the founder and chief executive of Newry-based technology company First Derivatives, has died at the age of 53. Mr Conlon, who was widely considered one of the North’s most successful business people, was diagnosed with cancer in May but continued to lead the company during his treatment.

Pepper Ireland, which sold its €200 million residential mortgage loan portfolio late last year, has reported a huge surge in pre-tax profits for 2018. Profits before tax jumped to €16.7 million in 2018 from €5.6 million a year earlier.

After 10 weeks of open qualifiers attracting more than 40 million competitors, the Fortnite World Cup finals were held over the weekend in New York with a total prize pot of over €27 million.

On Friday Taoiseach Leo Varadkar opined that he hoped the Central Bank might change the rule which requires first-time borrowers to have a deposit of 10 per cent of the purchase price. Cliff Taylor argues that not only was his timing poor, with a new governor shortly about to take the reins at the Central Bank, but we need more affordable homes, not unaffordable loans.

Finally, Pilita Clark spells out the hidden hell of hot-desking, which is much worse than you think. Among the litany of issues, she points to a recent report that found people doomed to hot-desking waste an average of two weeks a year just looking for a place to sit.