Strong track record with multinationals may provide State with some protection 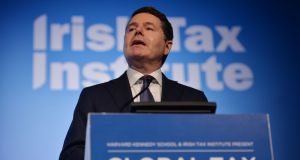 Proposals to impose a minimum tax on the profits of major multinationals is the biggest threat to Ireland from the OECD’s tax reform process, Irish tax experts say. However most believe that Ireland’s established record as a location from which the big players are running their international operations successfully will provide the country with some protection.

Changes under the OECD Beps (base erosion and profit shifting) process have so far benefited Ireland. Investment has flowed into the State as a result of the tax changes, as companies try to bring earnings into economies where they already have substantial activities, said Séamus Coffey, economist at University College Cork and the author of a major report on the corporation tax issue.

This has been a key factor behind the doubling of corporation tax in the State to more than €10 billion last year. Tax experts say it is difficult to forecast the precise implication of the next wave of changes now being negotiated, but say it is does carry key risks for Ireland.

PWC managing partner Feargal O’Rourke said he believes that the entire OECD process will still be a net positive to Ireland. However, after gains in the first phase, “some of the downside will emerge from the current round of OECD discussions, even though it may take another three to four years to see them fully implemented”.

The proposal to introduce a minimum effective tax rate on corporate profits is seen as the biggest issue for Ireland. This would oblige companies to pay a “top-up” if the rate their profits had been taxed at is lower than the minimum set.

“If that minimum effective tax is fixed at higher than our 12.5 per cent rate, then the benefits of our regime could be eroded,” said Peter Vale, tax partner at Grant Thornton. A minimum rate such as the 18 per cent referred to in the European Commission presidential debate in May could, he said, “be damaging for Ireland”.

The effective rate that big multinationals have paid here in tax on profits has risen in recent years following the first round of Beps changes, according to Kevin Doyle, tax partner at BDO. Key for Ireland now is what effective rate the OECD chooses, he said, and how this is calculated.

The exchequer could also be affected by the other part of the OECD process, requiring companies to pay more tax in big digital marketplaces, meaning they will pay less in countries such as Ireland. Companies paying tax here “may need to get ready to pay tax in other jurisdictions where they have a digital footprint,” said Aidan Byrne, tax partner at RSM Ireland. “This will have an impact on Ireland’s budgetary process, so we need to be conscious of this when framing future taxation policy.”

While the tax changes are important for Ireland, the general view is that our location as a base for many existing multinationals will help to attract future investment. As the OECD changes are implemented, it is likely that there will be a “flattening” of global tax advantages, according to Byrne, meaning other factors will become even more important in location decisions.

According to O’Rourke, “the track record and experience that inward investment has had here over the last 30 years is our best calling card”.

Byrne said it is important that Ireland argues for “legitimate and fair tax competition” to continue to be allowed.

While tax experts see threats in the OECD process, they still feel an agreement is in Ireland’s interest. The earlier that consensus can be reached the better for the country on the basis that some future changes are inevitable, according to Vale, while Doyle warned that “failure by the OECD to find a consensus-based approach is a bad outcome for Ireland as a complex and disorderly mix of unilateral actions could impact Ireland even more”.

1 KBC Ireland fined €18.3m for ‘unconscionable’ tracker scandal role
2 The wealth of the Irish – how do your assets match up?
3 Will Facebook walk away from European market after data protection 'hissy fit'?
4 Dunnes Stores set to enter grocery delivery market
5 Irish company to test vaccines on volunteers deliberately infected with Covid-19
6 Dublin and Cork airports look at setting up pre-flight Covid testing centres
7 Willie Walsh joins CarTrawler as deputy chairman
8 JPMorgan Chase halts plans to bring back workers to London base
9 Air travel never going ‘back to way it was’
10 Eir takes on extra staff as ComReg chases it on complaints
Real news has value SUBSCRIBE