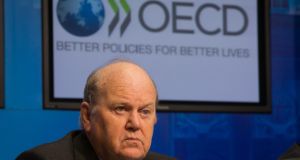 The European Commission has served formal notice on Ireland calling on it to implement key anti-tax-avoidance rules in relation to how companies use interest payments to cut their tax bills.

Ireland had said it would delay implementing the changes until 2024, but the European Commission has signalled that it does not agree with the basis on which this was done.

The commission can decide to take further action, up to and including bringing Ireland before the European courts, but the Department of Finance says discussions are under way to try to find an agreed route forward.

The disagreement relates to so-called interest limitation rules, which set a limit on the amount of interest deductions that companies can claim for tax purposes. These rules are a key part of the EU anti-tax avoidance directive, adopted in 2016, which must be implemented by member states.

Michael Noonan, the former minister for finance, announced he would delay the implementation of the new interest limit rules, due on January 1st, 2019, until 2024.

In doing so, Ireland was availing of an exemption that allowed countries to delay, provided they had sufficient rules in their existing tax system. However, the European Commission disagrees with the basis on which this was done and last week took the first steps to require Ireland to implement the rules.

Ireland has two months to reply and if it does not do so the commission can send what is called a reasoned opinion outlining its case – and could then decide to bring the case before the European courts.

“This step by the European Commission shows the increasing influence of the EU over Ireland’s tax affairs,” according to Andrew Quinn, head of tax at Maples Group. The directive was the first significant piece of EU legislation affecting how companies are taxed across the EU and more are likely to follow, he said. It was introduced as part of the OECD’s tax reform process.

The Department of Finance said in a statement that it did not agree with the commission’s assessment and believed Ireland’s existing regime was “at least equally effective” as that proposed in the directive.

However, it said Ireland was committed to engaging with the commission and work was under way to bring forward the process of transposition from the original planned deadline of end-2023. The rules will be changed “as soon as it is possible to do so effectively”, it said.

The new rules will affect large companies, according to Quinn, including property companies, the aircraft leasing sector and securitisation companies.

Interest, as a business expense, is normally deductible for tax purposes but in some cases companies use artificial structures including borrowings to cut their tax bill.