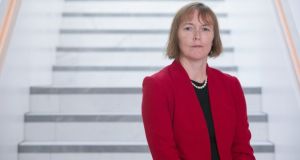 Sharon Donnery: Prudent management of the public finances are needed.

The acting governor of the Central Bank has said the dramatic increase in corporate tax receipts should not be used for current spending, and instead be put aside to “buffer against the next downturn or crisis”.

Sharon Donnery, who was speaking at the MacGill summer school in Glenties, Co Donegal on Monday, acknowledged her remarks on government policy strayed “beyond the Central bank tool kit”, but argued that neither the current low interest payments on national debt and high corporate tax receipts “should be regarded as permanent”.

“These funds should be put to work to buffer against the next downturn or crisis and not to finance current expenditure or to boost an economy which is close to capacity.”

Ms Donnery’s remarks represent the latest in a series of rebukes for the government’s spending plans.

Minister for Finance Paschal Donohoe has been forced to defend himself against the charge of using once-off corporation tax revenues to fund spending and budgetary plans in recent weeks.

Her words follow warnings from the Irish Fiscal Advisory Council earlier this summer, which said that the government was breaching post crisis spending rules, and that its long term financial planning was not credible.

Much of the criticism has focused on the financing of overruns in the Department of Health with windfall corporation tax revenues, as well as the government’s failure to manage capital spending mega-projects like the National Children’s Hospital and the National Broadband Plan.

The IFAC warned earlier this year Ireland’s reliance on corporation tax could cause a hole to open up in the public finances. The Opposition has also criticised the government’s spending stance in recent weeks.

“While the domestic economy is doing well, we have the opportunity to boost our resilience to future shocks and risks.

“Prudent management of the public finances are needed,” Ms Donnery said. She added that “a clear strategy guiding the use of unanticipated revenue inflows should be promptly established,” adding that “we must fix the roof while the sun is shining”.

Ms Donnery reiterated the regulator’s support for revisiting tight post-crisis rules on bonuses in the banking sector, first flagged in a letter from former governor Philip Lane earlier this year. While the pay cap of €500,000 may limit the pool of candidates for senior positions, she said that lack of bonuses for certain key functions could prove to be more of a threat to financial stability.

“There are concerns in some particular areas of commpliance and risk and IT and so on, where there is big demand for people and it may be the case that the banks are losing people that they need,” she said.

She said that “one option could be exceptions” to the rules on bonuses, but added that ultimately such a decision would be for the Minister for Finance.

It comes after Minister for Financial Services Michael D’Arcy signalled in an interview with the Financial Times that the government was not minded to waive the €500,000 pay cap at State-supported banks. “The senior executives are on very large salaries, and, as long as the State owns (their banks), I’m satisfied the pay caps are appropriate”.

She also defended the Central Bank’s strict mortgage lending rules, which curtail lending to households based on income and property value metrics. The limited nature of exceptions permitted to the rules has been targeted by elements of the property and financial services industry, which have argued that they are artificially depressing demand among families and couples looking to buy homes.

“We are all acutely aware of the current challenges in the Irish housing market and the supply constraints. These challenges clearly impact on young couples and families, be they buying a new home or renting.

“But I have seen no evidence that more debt for these same young couples and families is the answer.”

She said the framework for mortgage lending is “sufficiently flexible and the allowances enable banks to take individual borrower circumstances into account”.

The acting governor, who was unsuccessful in her application to succeed Philip Lane earlier this year, also said that Brexit was already beginning to play out across the economy.

“As the possibility of a no-deal scenario looms ever larger, the uncertainty around the final outcome is already weighing on business and consumer sentiment”.

She said that the uncertainty around the final shape of Brexit makes modelling and predicting its impact on the economy particularly challenging. However, Central Bank estimates show that a no deal would lead to Irish economic output being six percentage points lower after two years than otherwise expected.

Amid record employment levels, increasing wage levels and pressure points in housing and rental markets, Ms Donnery also said many factors “point to an increased risk of an overheating economy, which we must be wary of”.

The open nature of the Irish economy also leaves us particularly sensitive to global and structural shocks, she said.

“While we benefit a lot from global opportunities, we also need to make sure we build defences to the risks,” she said.