Sterling slides to lowest level in more than two years

Currency falls against all its major peers – 90.3p to a euro – as Boris Johnson steps up preparations for a no-deal Brexit 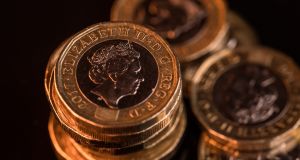 Sterling slid to its lowest level in more than two years as UK prime minister Boris Johnson stepped up preparations for a no-deal Brexit with just about three months left until the UK exits the European Union.

The UK currency fell against all of its Group-of-10 peers as various members of Johnson’s top team took a tough stance, with chancellor Sajid Javid saying he was stepping up treasury preparations for a no-deal departure and top aide Michael Gove writing in the Sunday Times that the government was now “working on the assumption” the talks with the EU would fail.

“The pound is back on the defensive after a short-lived relief rally following the appointment of Boris Johnson as the new prime minister,” said Lee Hardman, a currency analyst at MUFG. “The promotion of hard Brexiteers to key cabinet positions is consistent with a government that will press hard to deliver Brexit at the end of October with or without a deal.”

Sterling is the worst performer in the Group-of-10 currencies this month as investors brace themselves for the risk of both a no-deal Brexit and a general election. Morgan Stanley sees the pound falling to as low as parity with the dollar under a no-deal Brexit scenario.