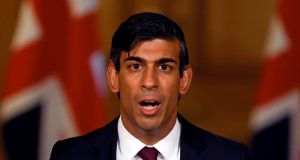 Britain’s coronavirus-ravaged economy shrank 9.9 per cent in 2020, the biggest annual fall in output since modern records began, but avoided heading back towards recession in the final quarter of the year, official figures showed on Friday.

Britain’s gross domestic product (GDP) grew 1 per cent between October and December versus the previous quarter, the Office for National Statistics said, compared with forecasts in a Reuters poll of economists for growth of 0.5 per cent.

This makes it unlikely that Britain will see two straight quarters of contraction – the standard definition of recession in Europe – even though the economy is set to shrink sharply in early 2021 due to the effects of a third Covid lockdown.

“Today’s figures show that the economy has experienced a serious shock as a result of the pandemic, which has been felt by countries around the world,” said finance minister Rishi Sunak on Friday.

“While there are some positive signs of the economy’s resilience over the winter, we know that the current lockdown continues to have a significant impact on many people and businesses.

“That’s why my focus remains fixed on doing everything we can to protect jobs, businesses and livelihoods.”

ONS deputy national statistician for economic statistics Jonathan Athow said: “Loosening of restrictions in many parts of the UK saw elements of the economy recover some lost ground in December, with hospitality, car sales and hairdressers all seeing growth. An increase in Covid-19 testing and tracing also boosted output.

“The economy continued to grow in the fourth quarter as a whole, despite the additional restrictions in November. “However, GDP for the year fell by nearly 10 per cent, more than twice as much as the previous largest annual fall on record.” – Agencies

6 Ireland v the rest of the world: Do we pay too much tax?

8 How much does it cost to sell your house?

9 Confusion reigns in motor trade as politicians are blamed