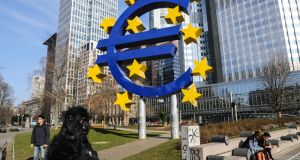 Euro zone concerns over the weakness of the dollar were laid bare in a set of European Central Bank minutes that highlighted fears the Trump administration was deliberately trying to engage in currency wars.

The account of the ECB’s January monetary policy meeting also reveals that its hawkish members pushed for a change in the bank’s communications, arguing economic conditions were now strong enough to drop a commitment to boost the quantitative easing programme in the event of a slowdown.

Mario Draghi, ECB president, last month hit out at US treasury secretary Steven Mnuchin’s claim that a weak dollar was good for the American economy. Mr Draghi said Washington needed to uphold the rules of the international monetary system, which forbid nations from deliberately devaluing their currencies.

Mr Mnuchin’s remarks were seen as a signal that the US could ditch its strong dollar policy - which could lower euro zone exports and make it harder for the ECB to hit its inflation target.

Mr Mnuchin later said his comments were “completely consistent with what I’ve said before” and that he had merely made a “factual statement” that a weaker dollar would help the US on trade in the short term. President Donald Trump has also since reaffirmed the strong dollar policy.

The accounts of the ECB meeting on January 24th -25th, published on Thursday, show Mr Draghi’s fears were widely shared among the bank’s decision makers. “Concerns were...expressed about recent statements in the international arena about exchange rate developments and, more broadly, the overall state of international relations,” the account said.

“The importance of adhering to agreed statements on the exchange rate was emphasised.” Those agreements explicitly rule out competitive devaluations.

The volatility in the euro was, the account said, “a source of uncertainty which required monitoring”.

The decline in the greenback following Mr Mnuchin’s remarks led the euro to soar to $1.25 in the days following the January 25th meeting of the ECB. The euro is now trading below $1.23.

The minutes highlighted dissent over the bank’s communications on its policy intentions, an element of what policymakers dub “forward guidance”.

The dissent was over the ECB’s promise to boost QE should economic conditions disappoint or financial conditions worsen.

The central bank is now buying €30 billion of bonds a month under the €2.5 trillion QE programme and will continue to do so until at least September.