The head-wrecking complexity of recasting WTO rules after Brexit

Cliff Taylor: The details will be hugely important for Irish businesses 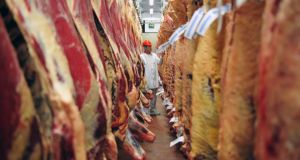 Irish beef: Ireland’s food sector could have to compete on equal terms with big players like Argentina and New Zealand. Photograph: Aidan Crawley/Bloomberg

If there is one thing that might drive the UK and the EU towards a trade deal after Brexit it is the head-wrecking complexity that will result if they don’t.

Doing a deal will, of course, be difficult. But not doing one would leave trade between the United Kingdom and the European Union governed by rules set by the World Trade Organisation – and recasting these for a post-Brexit world would fall into the category of egg unscrambling.

If this happens the detail will be hugely important for Irish businesses, particularly those in the food sector.

The rules governing trade are like a large building with multiple extensions built on over the years. Nobody knows how it quite holds together, but somehow it does

The rules governing trade are like a large building with multiple extensions built on over the years. Nobody knows how it quite holds together, but somehow it does. Central to this are schedules drawn up by each member of the WTO, outlining the basis on which it trades and, in particular, the tariffs – financial duties on imports – that it applies. Because the UK has belonged to the EU since 1973, its trade arrangements are, like those of all EU members, negotiated centrally, in Brussels.

After Brexit the UK will need to have its own schedule of trade arrangements with the rest of the world, under the aegis of the WTO. So what would operating under WTO rules mean? Agri-food and textiles could see tariffs range from 10 per cent to over 70 per cent, according to Brian Keegan, head of public policy and tax at Chartered Accountants Ireland.

About 40 per cent of Irish food exports go to the United Kingdom. Paul Kelly, Ibec’s director for the food and drink sector, identifies Cheddar cheese and beef as among the most exposed, pointing to economic studies showing that much Irish trade in these areas would be priced out of the UK market by full WTO tariffs.

The UK would be expected to replicate existing EU tariffs on goods from outside its borders after Brexit. But there are serious complications when you get into the detail. “Nontariff barriers, such as quotas – the amount of goods a country is permitted to import or export – can be more difficult to negotiate than the tariffs themselves,” according to Keegan.

Again, food is particularly in the firing line. The European Union sets detailed quotas allowing outside countries to sell some produce on favourable terms. For example, these so-called tariff quotas allow a certain amount of lamb from New Zealand or beef from Argentina to enter the EU market at zero or reduced tariffs.

The EU sets quotas allowing outside countries to sell some produce on favourable terms. The difficult bit, after Brexit, is deciding how these will be allocated

The difficult bit, after Brexit, is deciding how these quotas will be allocated. It is not as simple as the UK taking a notional share of an existing EU quota.

There are vulnerabilities here for the Republic of Ireland. If the UK does leave the EU without a new trade deal, it can offer quotas for low- or reduced-tariff imports of beef, cheese or other food. But it can do so only on the same basis as all other countries with which it does not have special trade deals, so Irish players could have to compete on a level playing field with the big players like Argentina and New Zealand.

As Stuart Harbinson, a former senior trade official who works with the Hume Brophy consultancy, pointed out in a recent paper: “ The loss of preferential access to the UK market would greatly affect Ireland’s exports, particularly in beef and diary.”

There could also be complications in cross-Border supply chains in Ireland, although there could too be new opportunities in EU markets previously supplied by the UK.

The United Kingdom’s staying in the customs union would the ideal solution for the Republic. The next-best solution would be a comprehensive EU-UK trade deal.

If neither is possible, get used to hearing a lot more about the arcane world of tariffs and quotas.