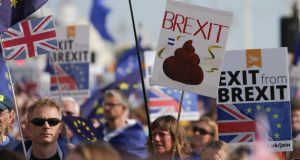 Image of the week: Turd-way politics

Inside its annual conference in Brighton, the UK Labour party had decided not to pick Brexit as the subject of one of its “contemporary motions” to vote upon, its official policy on the issue being to “say nothing much and wait for the Tories to wipe themselves out”. Outside, protesters spent a sunny Sunday marching along the south coast seafront with placards that made excellent and appropriate use of the poo emoji. The next day, the party issued a statement on Brexit that started by echoing Theresa “I’m very clear” May with the words “Labour is clear...” followed by a bunch of nouns and verbs and prepositions that failed to spell out its position on the single market.

Percentage of men who believe women are paid and rewarded in an equal manner to men, according to a survey by recruitment firm Hays Ireland.

Percentage of women who believe the same thing.

Percentage of male respondents (in a total sample of 250) who said availing of flexible working options would be a career-limiting move for men. Maybe give it a go anyway?

A Jaffa Quake has rocked the supermarket biscuit aisles and it’s about a 4.5 on the Shrinkflation Scale. McVitie’s, which says it produces “the original” jaffa cake, has cut the number of cakes/biscuits in the standard pack from 12 to 10. That obviously makes it easier to consume a pack in one go, but harder to equitably distribute one among three or four people. It’s also cut the recommended price, so if this is truly shrinkflation, then manufacturer United Biscuits (which also owns Jacob’s) is playing a longer game. Jaffa cakes have been produced by McVitie’s since 1927 and have spent much of that time trying to prove they’re a cake for tax purposes. It might take more than a single quake to destroy this biscuit.

Getting to know: Alain Bellemare

Bombardier chief executive Alain Bellemare is – like the 4,500 people in Northern Ireland who work for the company he runs – having a nightmare week. The aerospace company has been slapped with a proposed 220 per cent US trade tariff on the sale of its CSeries jets to US airline Delta after the US Department of Commerce ruled in favour of rival Boeing in a legal dispute about state aid. The Canadian, in the job since 2015, had been trying to turn the company around after the CSeries aircraft came in more than two years late and about $2 billion over budget. Bellemare was recently obliged to defer until 2020 a handsome pay rise for a group of six senior executives, including himself, as it was pointed out that the company was undergoing way too much turbulence for it to be justified.

Twitter’s announcement that it is trialling 280-character tweets, effectively moving away from its 140-character core feature, has been met with an overflow of derision from tweeters who would much prefer the company introduced these things instead.

1. Fewer bots: Is there anyone human out there?

3. Chronological tweets: What was it like in the past, old wise one? Well, my child, people read things in the chronological order that logic intended.

4. Truth: Imagine if the “okay, you won’t see this as much” message that pops up when you click on “see less often” actually meant something.

5. An edit button: Come on, it’s about ducking time.