Clarity no closer on post-Brexit border for Irish economy 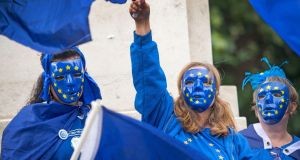 Taoiseach Leo Varadkar has insisted he does not want to see the return of an “economic border” on the island of Ireland. However today’s paper from the European Commission leaves us no closer to a solution on how this might be avoided.

For the Irish economy - and for businesses here - the uncertainty about how this will work out shows no sign of being clarified any time soon. London’s plan to avoid the return of the Border won’t work - and Brussels doesn’t have one.

The European Commission has said that it believes a “unique” solution is needed to the Irish Border question and that it is Britain’s responsibility to come up with it. It has already rejected as unworkable some outline proposals put forward by London a few weeks ago - and has now underlined that any solutions must not breach EU law or interfere with the workings of the EU single market.

So the problem evident from day one in relation to trade and the Irish Border is no closer to being solved. There has been progress on the common travel area - which if concluded should mean no checks for people crossing the Border. But no-one has worked out how Britain can leave the EU, depart the Customs Union, negotiate new trade deals with other countries and still avoid the reimposition of controls on the Irish Border. There is a logic here which simply cannot be avoided - if Britain leaves the customs union, the Border, in some form, is coming back.

Central to this is how to control the movement of goods entering Britain from other countries. If, for example, Britain strikes a new trade deal with the US, how do you stop US chicken, beef, or whatever, crossing the Irish Border and entering the EU Single Market, unless you have Border checks. As well as trade issues, this also involves the application of rules on the origin of products and their standards.

The easiest solution would be for Britain to remain in the EU Customs Union - the agreement allows the free movement of goods across the EU and common rules for products coming from third countries. Hopes had risen recently that it might agree to this, at least for a transition period after it exits in March 2019, but a leaked,draft UK paper this week on controlling migration casts some fresh doubt on this. Ireland will push both sides for some kind of transition arrangement, which would be vital to avoiding disruption in March 2019.

Unless Britain relents - and stays in the Customs Union - there is no obvious solution to the Irish Border conundrum. After all, the European Commission lead negotiator Michel Barnier, said just a couple of weeks ago that “frictionless trade is not possible outside the single market and customs union”.

There may be some “unique” approaches that can be used for the Irish Border to help reduce the levels of checks and bureaucracy. But if Britain leaves the Customs Union, the only one way to avoid Border controls completely on the island would be for the North to retain a special status - and stay as a member of the Customs Union itself, while the rest of the UK leaves. In turn this would mean border checks on goods leaving and entering the North for Britain - unacceptable for the DUP and for the North’s businesses, who trade more with Britain than the Republic.

A new customs union between Britain and the EU has also been suggested by London. This could lessen the need for customs barriers but again - assuming London wants to push ahead with new trade deals with third countries - it would not eliminate them.

Depending on how this plays out, our Government may at some stage have to make the call on whether to accept the return of some kind of Border controls on goods , and fight to minimise them as much as possible.

So for the Government here and businesses, the threat of a return to controls on the Irish Border remains. So does the wider issue of possible tariffs and customs checks on goods crossing the Irish Sea to Britain, with the extent of this depending on what deal is done on new trading arrangements between the EU and UK. None of this looks likely to be sorted any time soon. For exporting and trading businesses and those with supply chains that cross the Border or the Irish Sea, the only sensible approach seems to be to prepare for a range of possible scenarios.

1 PTSB plays down Ulster Bank talk as it sells €1.4bn of loans
2 How much state pension will I get next year?
3 Housing crisis will be permanent unless there is radical rethink, industry warns
4 Up or down – how much is your Local Property Tax this year?
5 Irish tech company Asavie acquired by Nasdaq-listed Akamai
6 Am I crazy to consider switching to an Ulster Bank mortgage?
7 Customers say how companies act during Covid-19 reflects their trustworthiness
8 Saudi Arabia’s Zahid increases stake in Dalata Hotels to almost 10%
9 Ghost newspapers and zombie brands are stalking the media
10 Fifteen seconds to sell: TikTok moves into social ecommerce
Real news has value SUBSCRIBE