In relation to Ireland, Ms May said the UK would not accept a physical infrastructure at the border in a speech addressing Brexit negotiations in Florence. 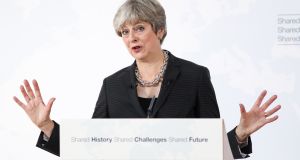 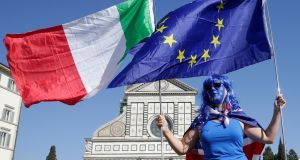 A demonstrator holds flags ahead of a speech by Britain’s prime minister Theresa May in Florence, Italy. Photograph: Max Rossi/Reuters 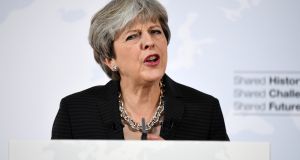 British prime minister Theresa May is outlining the UK’s proposals to the EU in an attempt to break a deadlock ahead of the fourth round of negotiations on Monday. Photograph: Getty 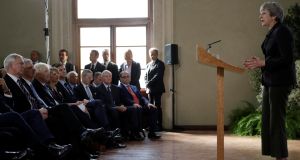 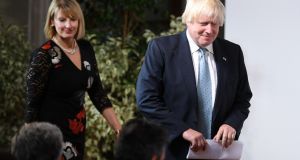 British prime minister Theresa May called on Friday for Britain to stay in the European Union’s single market during a roughly two-year transition out of the EU while offering concessions on a divorce deal as she appealed for a revival of Brexit negotiations.

During her address at a 14th century church in Florence, Ms May spent much of the speech drawing on the similar values of Britain and the rest of the EU.

She said if the complicated talks to unravel more than 40 years of union should fail, the only beneficiaries would be those who oppose democracy, liberalism and free trade.

But her concessions on her vision for a two-year transition period on Britain’s current membership terms, final financial settlement and legal protection of EU citizens rights when Britain leaves in March 2019 may still fall short of what the EU said was needed to move the negotiations forward.

In relation to Ireland, Ms May said the UK would not accept a physical infrastructure at the border.

“We and the EU have committed to protecting the Belfast Agreement and the Common Travel area,” she said.

“Looking ahead, we have both stated explicitly that we will not accept any physical infrastructure at the border.

“We owe it to the people of Northern Ireland, and indeed to everyone on the island of Ireland, to see through these commitments,” she said.

Ms May gave some detail to her idea of a transition period by saying the conditions should be the same and by offering a change on protecting EU citizens’ rights, by suggesting decisions by the European Court of Justice would be taken into account by British courts.

The pound weakened about half-a-penny against the euro and three-quarters of a cent against the dollar during her speech, underlining the sensitivity of the talks to markets and firms, some of which fear Britain could crash out of the bloc without a deal.

“For while the UK’s departure from the EU is inevitably a difficult process, it is in all of our interests for our negotiations to succeed,” she told an audience of Italian business leaders and diplomats.

“If we were to fail, or be divided, the only beneficiaries would be those who reject our values and oppose our interests.”

In Florence, Ms May drew on the history of an Italian city made wealthy by trade and banking during the Renaissance to underline her desire for Britain to become a major European trading power after leaving the bloc.

Her words were aimed at unlocking the first phase of negotiations with the EU, all but stalled over one of the most symbolically important questions: how much will it cost Britain, in hard cash, to end its EU membership in March 2019? Since triggering the divorce process, Ms May has repeatedly said Britain would honour its obligations but has also been under pressure from pro-Brexit supporters in her Conservative Party to reduce the bill or even bring it down to zero.

Ms May’s speech comes at the start of a crucial week for Europe.

On Sunday, German voters are expected to return conservative chancellor Angela Merkel to power but also vault eurosceptic parties into parliament, including the Alternative for Germany (AfD) whose nationalist, anti-immigrant ideas echo those of Britain’s UKIP party, a driving force behind Brexit.

Two days later, French president Emmanuel Macron is expected to flesh out his ideas for a “relaunch” of the EU and euro zone, underscoring the bloc’s determination to press ahead with a closer union that excludes the UK.

Britain desperately wants to move the talks forward and start addressing how a future relationship with the EU would work, a move Ms May’s government says is vital if they want to find agreement on the divorce settlement.

But the EU has stood firm, refusing to discuss trading arrangements until “sufficient progress” had been made on the first three issues - the financial settlement, the border with EU member Ireland and the protection of expatriates’ rights.

Ms May’s ill-fated decision to have an election in June not only used up time but also sapped her authority and gave a stronger hand to pro-Brexit legislators who want a total break with the bloc and to reduce any divorce bill to zero.

At the speech, Ms May’s top team of ministers put on a show of unity - with foreign minister Boris Johnson, one of Britain’s most prominent hardline Brexit politicians and a one-time leadership contender, sitting on the front row.