Varadkar sets out to win nonexistent debate on property tax

Analysis: Taoiseach doesn’t need to battle for homeowners. He can just decide, if Dáil agrees 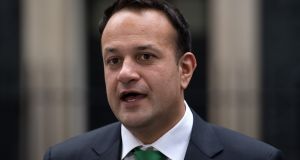 Taoiseach, Leo Varadkar who said on Monday he would try and resist any sharp increased in property tax rates. Photograph: Getty

Taoiseach Leo Varadkar chose an interesting formula of words for his latest comments on local property tax, indicating he would work to avoid the imposition of pain on taxpayers.

Except, the fact is his Government can do exactly what it wants when properties are due to be revalued in 2019.

The Taoiseach and his Ministers do not need to bravely battle in the defence of beleaguered householders - they can simply decide what happens, assuming they get Dáil support for whatever this is.

The current local property tax (LPT) regime is based on house valuations from May 2013. These valuations were meant to be updated in 2016 , but then finance minister Michael Noonan decided to freeze them for another three years and introduced legislation to allow this to happen.

The property valuations upon which this tax is based are due to be updated in November 2019, forming a basis for revised payments in 2020.

Because house prices have shot up in the meantime - by more than 60 per cent since May 2013 according to CSO figures - if this revaluation went ahead, without any intervention, it would mean big increases for many homeowners, particularly those in Dublin and other urban areas where prices have risen the most.

By saying he would fight “might and main” to avoid such sudden increases, the Taoiseach is setting himself up to win a non-existent debate.

There will be no demand from any side of the political spectrum for increases of this level.

Despite residential property being the main source of wealth for most people, parties of the left such as Sinn Féin are amongst its harshest critics. Nobody will support an increase in the tax based on updated house price valuations due to the scale of hike this would impose.

The more interesting question is what will actually happen?

While this morning’s headlines spoke of a potential further “freeze” in valuations - maintaining the tax at current levels, the Taoiseach left his options open. He said he would fight to avoid “any sudden hike in property tax that would come about because of house revaluations”.

Freezing the valuation is one way to achieve this but there are other options. All the Government needs to do is to introduce legislation amending the tax in whatever way it wants - and, of course, get enough support to get it voted through.

At the moment LPT is charged at 0.18 per cent of the price of a house up to €1 million and 0.25 per cent on the amount over €1 million. For houses valued up to €1 million, there are a range of valuation bands and households had to choose in 2013 which band they were in.

The Government can propose legislation to amend the bands or rates in any way it wants, to achieve the goal of avoiding a sharp jump in tax liabilities after the 2019 revaluation.

The political question it faces is once it heads down this road of adjusting the tax, at least some people are likely to have to pay more, leading inevitably to controversy.

Freezing is the only option which avoids any increase but pursuing this in the long-term would see the tax gradually declining in importance as the economy and other tax sources grew. It would represent a slow killing off of the charge.

And already, with a yield of €480 million or so, it accounts for less than 1 per cent of total annual tax revenue.

Further tricky questions apply to the exemption for new houses bought since 2013, on which no LPT is currently due. Does the exemption continue for these houses and for future new builds and is this fair to the rest of those paying?

In a 2015 report, Dr Don Thornhill, outlined a number of options for the future of the tax. His favoured one was to recast it as a local authority charge, raising funding each year based on the need of the local council. In this scenario annual increases could be tied, for example, to general inflation, rather than house prices which tend to be volatile.

Labour leader Brendan Howlin recently called for a similar approach to that recommended by Thornhill, saying that full responsibility for the charge should be handed to councils, subject to them raising a minimum centrally-set figure. Already there is a live debate in councils around the country about tax levels for next year - which they can vary up or down by 15 per cent - and the trade-off between service levels and revenue.

There are arguments for taxing property. It allows less tax to be raised on income - helping employing - and widen the tax base, thus making it more stable. And it provides some local authority funding.

These were the reasons the Troika pushed us to introduce it in the first place. But the decision to freeze the tax in 2016 and the huge political resistance to any additional charges and the bitter and protracted battle over water charges means this is a tricky one.