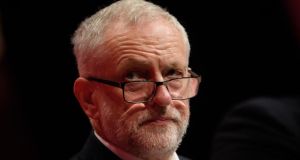 Remaining in the single market permanently could prevent Labour from implementing its policies, Jeremy Corbyn has warned.

“We need to look very carefully at the terms of any trade relationship, because at the moment we are part of the single market, obviously,” he told the BBC’s The Andrew Marr Show.

“That has within it restrictions on state aid and state spending. That has pressures on it, through the European Union, to privatise rail, for example, and other services. I think we have to be quite careful about the powers we need as national governments.”

Labour wants Britain to remain in the single market and the customs union during a transitional period after it leaves the EU but has not committed to any specific trade arrangement beyond that. Before the conference began, more than 30 Labour MPs joined MEPs, peers, trade union leaders and mayors in writing an open letter calling for Mr Corbyn to commit to full and permanent membership of the single market.

The Labour conference will debate Brexit today but Mr Corbyn’s supporters want to avoid a vote that could change party policy. Polls suggest that two out of three Labour members want to stay in the single market after Brexit and MPs and activists from different wings of the party have joined forces to defend free movement from the EU. Mr Corbyn said he understood such sentiments, although he was concerned about the exploitation of free movement by unscrupulous employers.

Shadow Brexit secretary Keir Starmer told a fringe meeting on Europe at the conference that Labour wanted to retain the benefits of single market membership but that the mechanism for doing so was secondary.

“That is because the single market and the customs union are hugely important to the future of our country. How we achieve that, in my view, is secondary to the fact that we do achieve it. We can go up hill and down dale about what that means for the single market and the customs unions, go round the houses and have any number of models. For me, what matters is the outcome,” he said.

But Chuka Umunna, one of the party’s most pro-European MPs, told the meeting that, although Labour’s promise to stay in the single market and the customs union during a transition was welcome, it should go further.

“Access is inferior to membership, and that’s why we need single market membership ... We’re pleased at the big step forwards. We just need to nudge to where we really want to go,” he said.