Amid the bad news, Britons find reasons to be cheerful

London Briefing: Despite Brexit and falling pound, Britain’s happiness index is going up 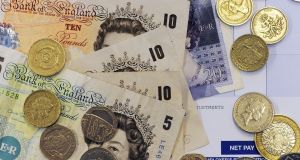 One of the possible reasons behind the nation’s growing good cheer is that the employment rate in the UK is at its highest level since comparable records began in 1971, while the unemployment rate is at its joint lowest since 1975. Photograph: Nick Ansell/PA Wire

Brexit, political chaos, mounting debt, rising prices and the falling pound: for most Britons, the past year has been one they’d prefer to forget – and that’s before you factor in the relentless tweet-storm from across the Atlantic from US president Donald Trump.

So news Tuesday from the nation’s number crunchers that we’re happier now than we were before the Brexit bombshell came as something as a surprise.

According to the Office for National Statistics (ONS), happiness levels in Britain have climbed to their highest rate since 2011, when government statisticians began measuring how we’re feeling as a nation.

Britain was one of the first major countries to introduce a “happiness index”. It is intended to be seen alongside the traditional economic measure of prosperity – gross domestic product – giving policymakers and the public a more holistic view of how the nation is faring.

“How satisfied are you with your life nowadays?”

“To what extent do you feel the things you do in your life are worthwhile?”

“How happy did you feel yesterday?”

“How anxious did you feel yesterday?”

The ONS’s Matthew Steel accepted that some might find the figures surprising, given the background of huge political change and uncertainty when the readings were taken.

He put forward a number of possible reasons behind the nation’s growing good cheer, not least that the employment rate in the UK is at its highest level since comparable records began in 1971, while the unemployment rate is at its joint lowest since 1975.

Research shows that a number of other factors influence our quality of life and wellbeing, ranging from employment or job satisfaction, our health, the quality of our relationships and personal financial security.

Northern Ireland again tops the charts for the highest levels of overall personal wellbeing, with people there enjoying higher rates of life satisfaction and lower anxiety levels than the rest of the UK.

The ONS highlighted a “statistically significant” increase in the proportion of people reporting “very high” levels of life satisfaction, while there was no change in the number who said their satisfaction was low.

But can we believe the figures? The number crunchers have come under fire in the past over the accuracy of their data and, even as it was telling us all how cheerful we are, the ONS was issuing a correction to some of its recent data on government borrowing.

It said the error, dating back to January last year, stemmed from an incorrect calculation on local government borrowing. This fed through to the overall figure, with the end result that borrowing for the current financial year so far is £28.2 billion, not £28.3 billion.

In the age of the selfie, perhaps the biggest surprise in news of the closure of Britain’s oldest picture postcard publisher is that the business is still around at all.

After almost a century and a half, family-owned J Salmon has announced it will cease publishing in December. Its business has been hard hit by the rise of the selfie and social media, with holidaymakers preferring to post photos and videos on Facebook or Instagram rather than going to the bother of writing a postcard.

The trend towards more frequent, shorter breaks has also hit the business. As brothers Charles and Harry Salmon noted, you’re usually back home before your postcards have arrived.

News of the closure sparked a wave of nostalgia for the bygone era of saucy seaside pictures and unintelligible scrawlings on the back of picturesque scenes.

The first postcard was sent in 1840 but the golden era was seen in the early 1900s. According to the Royal Mail, between 1905 and 1915 more than 750 million postcards were sent in Britain each year, equivalent to two million a day. That figure has dwindled to an estimated five million a year.

But it’s not just the rise of the selfie that has forced the firm’s closure. Charles and Harry are the fifth generation of the family to run the Kent-based business and say there are no more family members who want to join the firm.

And who can blame them? After all, when was the last time you interrupted your holiday to buy stamps and find a postbox? Answers on a postcard please.